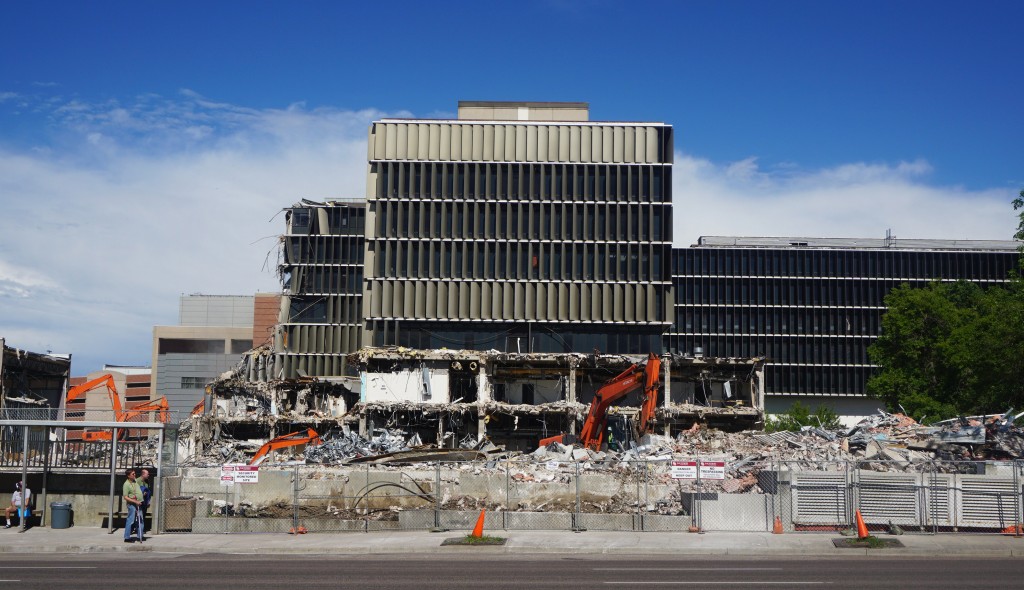 A former hospital building is coming down on Colorado Boulevard. Photos by Burl Rolett.

Demo crews are dissecting the former campus of the University of Colorado hospital on Colorado Boulevard.

Continuum Partners is razing the hospital campus at Ninth and Colorado to make way for the first phases of a $400 million redevelopment. Buildings are coming down between Ninth and 11th avenues, to be replaced by 600 apartments and retail space.

A 1,100-car parking garage at 11th and Colorado will stay put. A project update released in April shows a 323-apartment building east of the garage and another 280-unit complex to the south at Ninth and Colorado. Renderings have those buildings topping out at about eight or nine stories.

The parking garage and the smaller building will have ground-floor retail space. Plans show nine new townhomes backing up to the garage’s ground floor and a block of mostly open space at the southeast corner of Albion Street and 10th Avenue.

Continuum Partners is developing the former hospital in a joint venture with Los Angeles-based CIM Group. The partnership bought the 26-acre site for $30 million in January. Centennial-based Saunders Construction is the project’s general contractor.

All told, the Ninth and Colorado redevelopment could host up to 1,100 residential units, 125,000 square feet of office space, 250,000 square feet of retail space and a hotel in the former Research Bridge spanning Ninth Avenue. Construction is scheduled to run over the course of about five years.

A former hospital building is coming down on Colorado Boulevard. Photos by Burl Rolett.

A former hospital campus is being razed on Colorado Boulevard to make way for a $400 million redevelopment project.