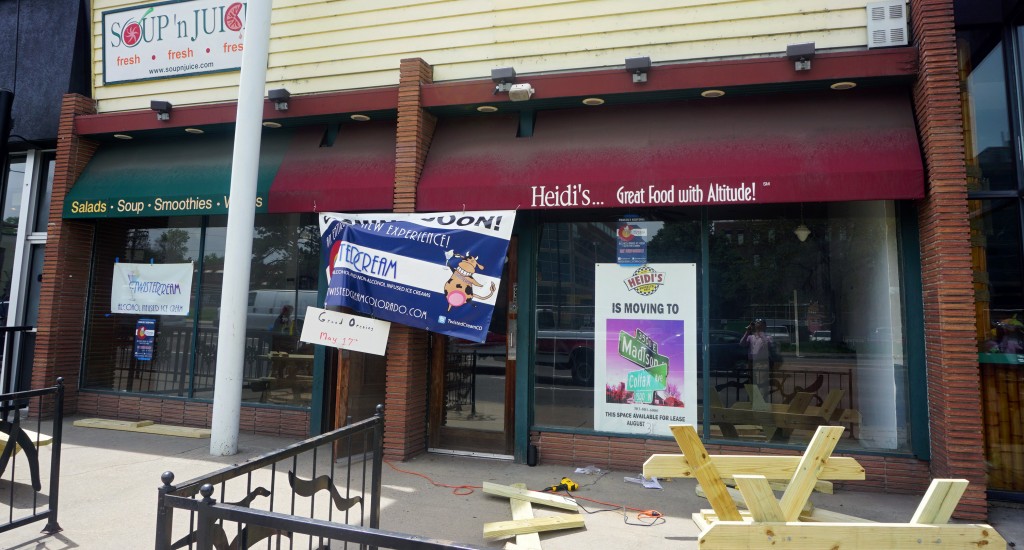 If Ben & Jerry and Jack Daniel were drinking buddies, this would be their watering hole.

“Initially we started off just distributing because we were trying to get the name out,” partner David Clark said. “We had ads on the radio and some interviews in a few different magazines, and that worked well for us. But it works much better to get the name out for Twisted Cream if we have our own storefront.”

The move comes about 18 months after company co-owners Clark, Chris Taub and Christian Sigrist began tinkering with blending shots of liquor into half-pints of ice cream. It was Taub’s idea, Clark said, and came in a moment of “late-night inspiration” after an evening out on the town.

Starting May 17, Twisted Cream will be slinging ice cream over its own bar at 835 Colorado Blvd.

The company signed a two-year lease for 2,000 square feet three weeks ago, Clark said. And the crew has been working on constructing the space ever since.

Clark liked the Colorado Boulevard shop for its high traffic and the location across from the redevelopment of the former CU hospital. For now, Twisted Cream will sell only ice cream, but Clark said they could eventually add a more conventional bar.

“It has enough space for us to expand if we need to,” he said. “We have some ideas on how to use such a big space; it’s much bigger than a regular ice cream store.”

Twisted Cream will sell alcoholic ice cream by the scoop and in 8-ounce carryout tubs. It makes all the ice cream at its Longmont facility.

A single scoop will cost $4, a double scoop runs $6.50 and the “Twisted Double Double” packs a full shot of liquor at $9. To-go containers will also have a full shot and sell for $6.50.

Traditional non-alcoholic ice cream will be on sale for kids, Clark said.

Clark would not say how much Twisted Cream will spend to launch its store. The storefront venture is being funded with cash from the company’s three partners and outside investment money, he said.

Twisted Cream isn’t ready to add another store quite yet and is currently focused on getting its name out to push product at area bars. But margins will be better for on-site sales, Clark said, and eventually the company wants to make a big business of alcoholic ice cream parlors.

“Once the retail store takes off, it will be a lot easier for us to get into more bars and restaurants because we’ll have the name recognition,” he said. “But the endgame is to get a few more retail locations open and eventually franchise it out.”

A Denver startup is making drinks and dessert a one-scoop stop. The alcoholic ice cream concept opens its first storefront on Colorado Boulevard this weekend.