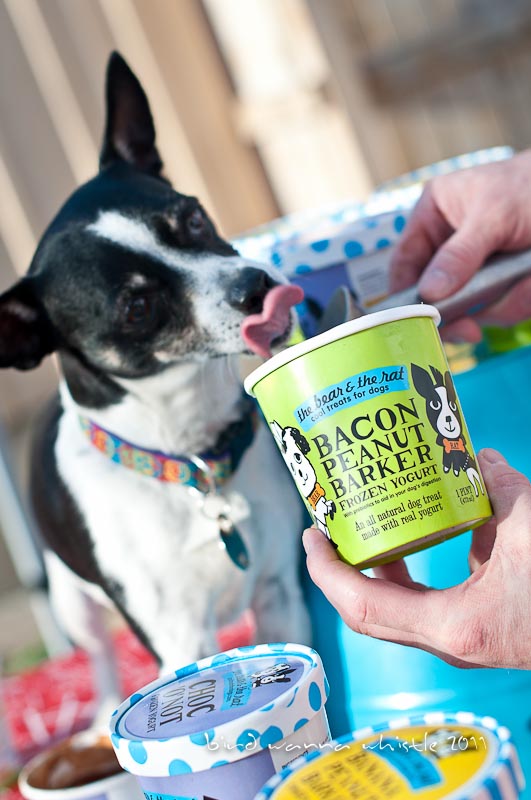 A local couple is expanding their fro-yo dog treat business. Photos courtesy of The Bear & The Rat.

Last year the husband-wife team of Matt and Meg Meyer went full-time with their dog treat startup, The Bear & The Rat.

The company, which the Meyers run out of their Longmont home, has been selling four flavors of chilled dog-safe frozen yogurt since 2011.

Armed with $200,000 in fresh venture capital that the company raised this year through an investor, the pair launched their first freeze-dried yogurt for dogs.

“This is a big deal because there is nothing for dogs out there on the market,” Meg Meyer said.

The new products don’t need to be refrigerated and have less lactose than normal ice cream. But they still contain probiotics that are helpful to dogs’ digestion, Meyer said. And they’re low-calorie, which means they can be used as training aids without packing on the pooch pounds.

A 2-ounce bag that contains 180 treat servings costs $10. The freeze-drying process sucks out all the moisture.

The new products will also let the company sell direct to consumers through Amazon with the two flavors, sweet potato carrot and bacon.

“Our other products are frozen, so we have done almost all our business B-to-B,” Meyer said. “With freeze-dried yogurt, we’re looking to open up additional channels. Online is a big one, and we (also want to) add grocery into the mix. Right now we have a minimal amount of grocery retailers.” 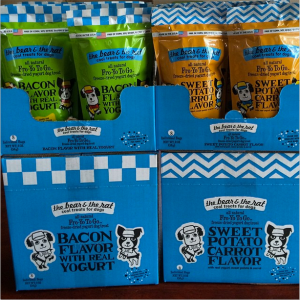 The company is trying to get its fro-yo and freeze-dried treats onto more store shelves.

The new freeze-dried frozen yogurt is made in Illinois. The company’s original frozen products are manufactured in Boulder.

The Meyers started the company in 2010 after noticing their dogs – nicknamed “the Rat” and “the Bear” – would get upset stomachs when slipped a normal ice cream treat.

So they created their product and started distributing around Colorado.

None of the investors on the show bit at their business, but that didn’t surprise Meg Meyer, who had previous experience as a reality TV producer for shows on HGTV and the Food Network.

“We were really thankful we weren’t offered a deal,” she said. “We met our angel investor right after. He looked us up after seeing the program.”

Meyer said the credibility from the show has helped get the product into pet industry distributors.

“If we didn’t have ‘Shark Tank,’ it would be a lot harder to acquire (large distributors),” Meyer said.

A local couple is expanding their fro-yo dog treat business. Photos courtesy of The Bear & The Rat.

After making an appearance on "Shark Tank," a local startup that makes frozen yogurt for dogs has found a way to get its treats into the hands of more pet lovers.