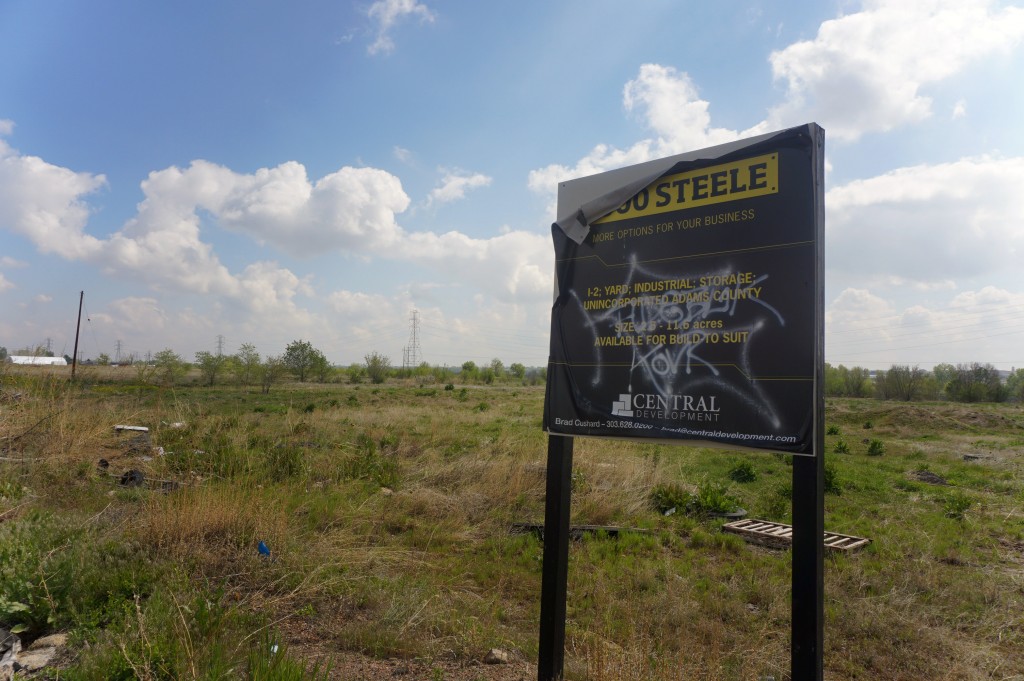 A metal company has signed on to the upcoming industrial development at 8000 Steele St. Photo by Burl Rolett.

Adams County is about to get 70,000 square feet of steel.

“We’ve been working with Samuel for maybe 24 months trying to find a location that worked for them,” Cushard said. “Their business is metals, and therefore margins are pretty tight, so rent is a critical component to their business.”

The building itself is a tilt-wall construction warehouse Cushard said will cost about $80 per square foot to build. Cushard expects to break ground in the next two or three weeks and finish construction by the end of the year.

Samuel, Son & Co. representatives declined to comment on the company’s plans for the new warehouse. The Ontario-based company manufactures, processes and distributes metal products and has about 100 total locations, according to its website.

The Adams County Samuel building will be the first piece of an 11.6-acre industrial park Central Development is planning at 8000 Steele St. Central Development bought the land from Riverside Investment Holdings LLC for $1.26 million on April 9. CBRE brokers Eric Roth and Martin Roth represented the seller.

Central Development then sold the Samuel chunk of the park to Denver-based Comunale Properties for $496,579 in a deal that closed the same day, county records show.

Central Development still owns three pad sites at the planned Steele Street industrial park. Cushard said the firm could pursue more build-to-suit projects, add speculative warehouse space or fence that property off and rent it out as a storage yard.

“Right now the location is more rural, or less developed than most metro Denver areas,” Cushard said. “It’s kind of a sleepy area, and we’re hoping this will help kick-start it once Samuel has moved in.”

A metal company has signed on to the upcoming industrial development at 8000 Steele St. Photo by Burl Rolett.

A 70,000-square-foot metal warehouse will be the first building to rise at a planned 11-acre industrial development in Adams County.