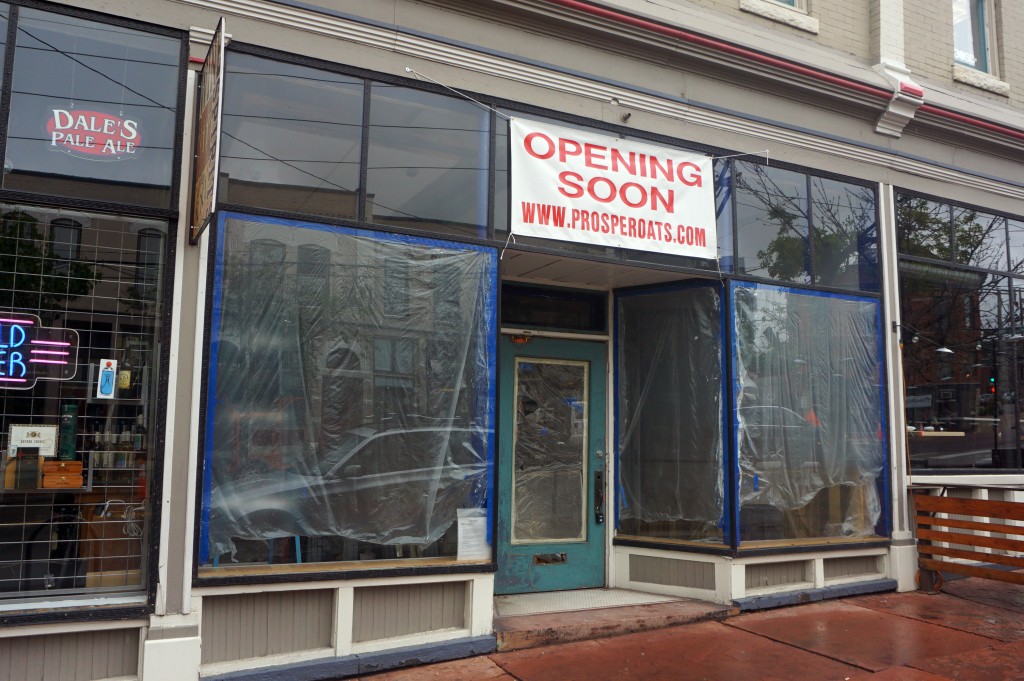 A new breakfast concept is opening on 15th Street. Photo by Burl Rolett.

A family of first-time restaurateurs is adding breakfast to the Denver fast-casual menu.

Co-owner Jenna Berrios said she hopes the build-your-own breakfast bowl concept Prosperoats will fill a hole in the a.m. restaurant business when it opens this spring.

“We’ve been watching some trends over the last couple years since this idea first came to us, and if you look at all the major fast food-type chains, there is a huge lack of food for breakfast on the market right now,” she said. “You see chains like Taco Bell trying to dig into this breakfast market.”

Berrios, a Denver native and Colorado Academy graduate, co-owns Prosperoats with her husband Felipe Berrios, brother Sawyer Oglesby and father Kelly Oglesby. The idea for the brand took root while Berrios and her husband were living in Chile a few years ago. The duo moved to Denver last August to launch the brand.

Prosperoats signed a lease for its first location at 2550 15th St. in September. It’s the first of three stores Berrios said they hope to open in a year. She said she liked the 1,000-square-foot storefront for the traffic it sees on the morning rush from the Highlands down the hill into downtown.

“15th Street is probably one of the most highly transited streets between the hours of 6 a.m. and 10 a.m. anywhere in Denver,” she said. “And there are also pretty much zero options for breakfast in this neighborhood, and certainly nothing quick.”

The restaurant will offer bowls of steel-cut oats and yogurt and a menu of 50 toppings, including staples like walnuts and raisins and less common toppings including crystallized ginger, chia seeds, flax seeds and pumpkin puree.

Steel-cut oats are essentially oatmeal before it’s been flattened into the everyday instant oats. The dish takes about 45 minutes to prepare, Berrios said, and comes out looking more like rice than typical oatmeal.

Steel-cut oats were the only staple item Berrios had in mind when she started tossing around the idea for a restaurant. She realized yogurt would also work well within the design-your-own bowl scheme after visiting a yogurt bar in Israel as Prosperoats was taking shape.

Prosperoats is primarily after the breakfast crowd but will stay open until 8 p.m. Berrios said they’re working on menu additions for later in the day and hope to draw some afternoon and evening business from people leaving the nearby gyms and yoga studios in search of a post-workout meal.

The eatery doesn’t yet have a firm opening date, but Berrios said construction should be finished in about three weeks. Prosperoats will launch with four employees.

Berrios declined to say how much the co-owners invested to get the first Prosperoats up and running, but she said it has been funded with personal savings. She added that Prosperoats has willing investors ready to buy into planned second and third locations.

Berrios said she picked a location for the second Prosperoats spot but does not yet have a lease signed. She wouldn’t say where that second shop will be but hopes to have it open by October or November of this year.

“Denver has a lot of opportunities, and I think it would probably work no matter what neighborhood you put it in,” she said. “For now we’re in north downtown, so preferably the next location would probably be somewhere south of us.”

A new breakfast concept is opening on 15th Street. Photo by Burl Rolett.

An upcoming restaurant is adding oats and yogurt to the build-your-own-bowl mix, and there are already more locations in the works.