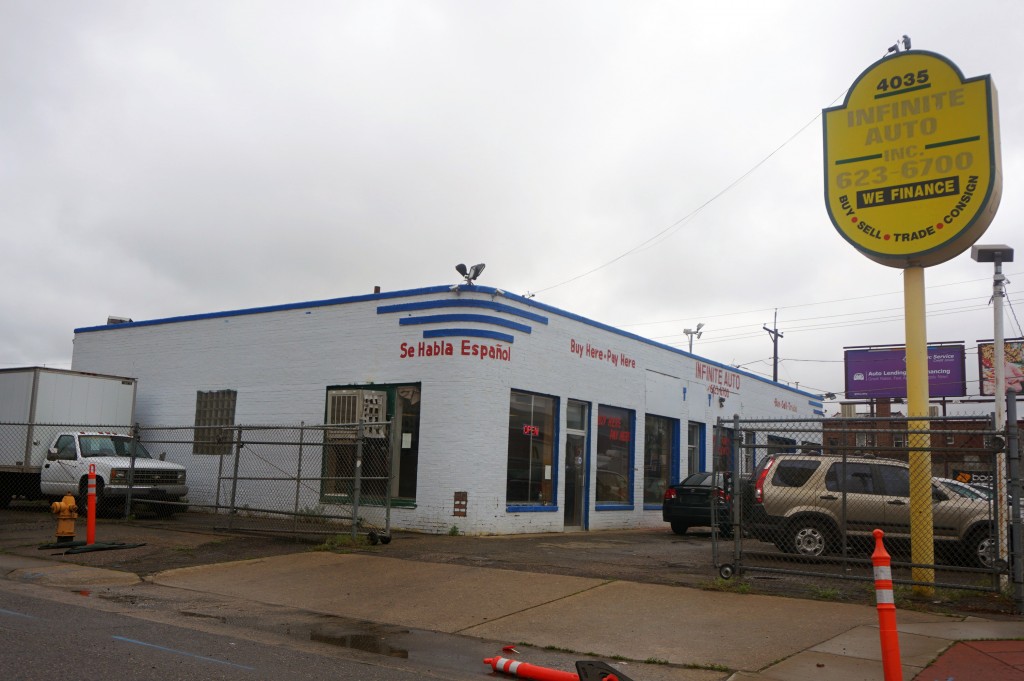 The current home of a car dealership will soon make way for new apartments. Photo by Burl Rolett.

“This is our effort to obtain another stretch of frontage on West Colfax, and we’re working to put together a development plan,” he said. “The site has such great proximity to transit and other amenities, so we’ll be looking at healthcare uses on the ground floor with affordable or seniors’ housing on the upper levels.”

The planned housing development is at least a year and a half in the works, Bertron said, and will likely total more than 100 units. The site is zoned for as many as eight stories. Bertron declined to say how much the development would cost.

EnviroFinance plans to begin construction in the second or third quarter of 2016. In the meantime, the company is leasing the car lot back to Infinite Auto.

The car lot is the second piece of a three- or four-parcel land assemblage EnviroFinance is putting together along Colfax Avenue between Quitman and Perry streets. The company bought an adjacent lot at Colfax and Perry Street for $750,000 in March 2014.

Bertron said EnviroFinance has an option to purchase a smaller lot at 4017 W. Colfax Ave. and is eyeing a fourth property set back from Colfax.

“We’re looking at one more piece directly behind it, but that’s not a necessity,” he said. “It would be a benefit to have a little extra space.”

EnviroFinance is putting together the real estate for its planned apartment complex as it heads up a major redevelopment at the 20-acre St. Anthony Hospital site one block north. Two apartment towers are being built there by Trammell Crow, and there will be a retail center anchored by an Alamo Drafthouse Cinema and a 12-story condo building planned by NAVA Real Estate Development.

EnviroFinance typically redevelops sites with environmental challenges – such as hazardous materials from former industrial use – and then sells the land to developers like NAVA or Trammell Crow.

Bertron said EnviroFinance is looking for an equity partner to take on the Colfax affordable housing project. It’s unclear how much involvement EnviroFinance will have in the project after site work wraps up, he said, but the firm currently plans on maintaining an ownership stake.

“How much we’ll participate in the vertical development is to be determined,” Bertron said. “Our role here may be more than it is at the hospital site but not significantly more.”

The current home of a car dealership will soon make way for new apartments. Photo by Burl Rolett.

With a large-scale redevelopment already underway in the neighborhood, a real estate firm is piecing together land along West Colfax for a 100-apartment project in Sloan's Lake.