Fifty apartments with views of East High School are about to rise in City Park.

Inspire Investment Group plans to break ground in May on the $8 million Detroit Terraces development at 1530 Detroit St. It’s the second City Park apartment building for Inspire, which redeveloped a 30-unit building at 1504 Detroit St. four years ago.

“I think it’s a big draw to be that close to City Park, that close to Colfax and centrally located between Josephine and Colorado Boulevard,” said Brian Toerber, president at Inspire. “It’s not right on Colfax, though I’m not sure people don’t mind living on Colfax right now.”

The smallest studios will be about 400 square feet, putting per-square-foot lease rates between $2.25 and $2.50. One-bedroom units will range from 509 square feet to 545 square feet. The most spacious two-bedroom apartments will measure about 780 square feet. 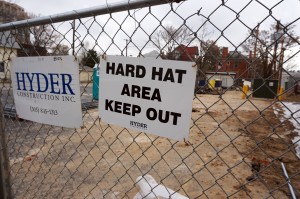 The three-story building will be 33,000 square feet. Photo by Burl Rolett.

“I wanted to stay on the small side,” Toerber said. “I’m a big believer in micro-units, but these won’t be, in my definition, micro-units.”

Detroit Terraces will also include a workout facility, common area and about 12,000 square feet of structured parking, features Toerber said he wasn’t able to build into the older Detroit Street project.

Toerber expects the new project will appeal primarily to renters in their early-20s to mid-30s. But he said his neighboring apartment building often draws in older residents. After taking a look at the tenant roster at 1504 Detroit, he found 10 rooms rented to 20-somethings, 10 rented to residents between 30 and 40 years old and 10 rooms with residents over 40.

Over the few years Toerber has owned that 30-unit building at Colfax and Detroit, he said it has averaged better than 95 percent total occupancy.

Construction on the Detroit Terraces is scheduled to begin in late April or early May and wrap up by the beginning of April 2016. Toerber said he hopes to start pre-leasing in the first quarter of next year.

Craine Architecture designed the building, Hyder Construction is the general contractor, and Great Western Bank is financing the construction.

Just up Detroit Street from a recent apartment project, a developer is digging into a new $8 million 50-unit complex in City Park.