The Broadstone at RiNo calls for a string of four- and five-story buildings with 270 apartments. Rendering courtesy of Alliance Residential.

Bulldozers are humming at another big-time RiNo development.

Alliance Residential has broken ground on its 270-unit Broadstone at RiNo apartment complex at 31st Street and Brighton Boulevard. It’s a $60 million bet Alliance placed on the fast-growing neighborhood about two years ago after watching development heat up at the nearby Taxi complex.

“The more Mickey (Zeppelin) was doing here, we knew that things were going to really speed up as far as the evolution of the neighborhood went,” said Andy Clay, an Alliance managing director. “We took a chance on the timing, and it just worked out.”

Alliance, acting as Broadstone Property Owner LLC, bought the land for the project in December 2014 for $7.75 million. Plans call for more than 220,000 square feet of total development between a trio of connected four- and five-story buildings. 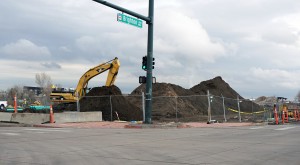 Construction crews are digging in to the site at Brighton Boulevard and 31st Street. Photo by Burl Rolett.

Studios will start at about $1,000, and the most expensive apartments will top out between $2,000 and $2,100. It’s a price point Clay hopes will catch young professionals who can’t quite afford a new apartment in the downtown or Union Station neighborhoods.

“A lot of those communities aren’t really attainable for folks who are in their mid-20s,” Clay said. “What we’re trying to accomplish here is a new product with incredible amenities that is really geared towards the tastes and the budgets of folks that are in their 20s.”

Broadstone at RiNo is a working title of sorts for Alliance’s latest apartment development. The Arizona-based company has built Broadstone complexes in at least 10 states, but Clay said the company often comes up with separate names to market its projects.

Parikh Stevens Architects, which previously handled the design for Broadstone projects in Cherry Creek and on Blake Street, was the architect on the Brighton Boulevard project. Alliance’s in-house construction firm will be the general contractor.

Clay said a formal groundbreaking ceremony will be scheduled for Broadstone at RiNo in the next month or so. He plans to begin pre-leasing early next year for move-ins during the second quarter of 2016, in hopes of hitting 90 percent occupancy by the end of next year.

The building’s amenities will include a fitness center, outdoor pool and rooftop deck, as well as a common indoor workspace.

Previously, Alliance put a CrossFit studio in its Broadstone Gardens at Cherry Creek and a bowling alley at its new Broadstone Blake Street apartment complex.

“I’m planning a little different twist on those kind of things,” Clay said. “We try to find creative ways to deliver the amenities that people want but in a way that’s fresh.”

The Broadstone at RiNo calls for a string of four- and five-story buildings with 270 apartments. Rendering courtesy of Alliance Residential.

Following in the footsteps of the Taxi development in RiNo, a Phoenix-based firm has broken ground on a $60 million 270-unit apartment project in the neighborhood.