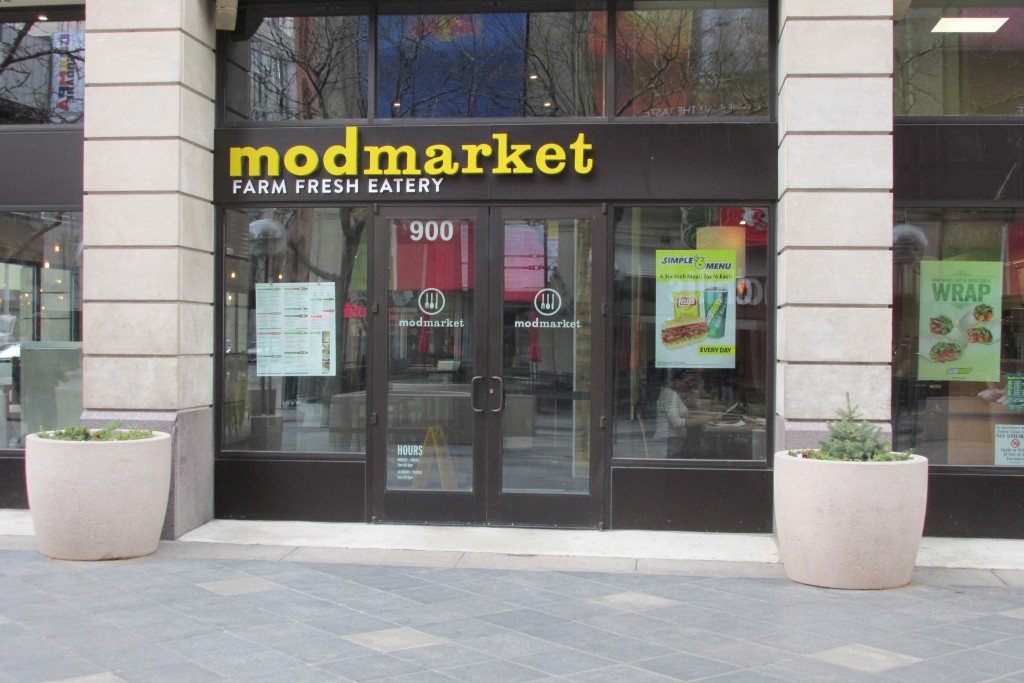 Modmarket, a restaurant that has a location on the 16th Street Mall, is taking a similarly named pizza restaurant to court. Photo by Aaron Kremer.

Two restaurants with “Mod” in their names are turning to court to settle a naming squabble.

Golden-based Modmarket – a fast casual chain with nine Colorado locations – sued Seattle-based Mod Pizza in U.S. District Court this week, asking that it be given the legal rights to its name.

Modmarket claims in the suit that after five years of peaceful coexistence, Mod Pizza threatened it with a lawsuit if it didn’t change its name. Modmarket is asking the court to grant it permission, through a declaratory judgement, to continue using the name.

The suit argues that the two names are not easily confused and that there is no basis for Mod Pizza to demand a name change.

“Although both marks share “MOD”, the similarities stop there. MODMARKET is a fanciful mark comprised of the unitary presentation of MOD and MARKET. In contrast, MOD PIZZA is two words, the second word being PIZZA to identify the nature of the food sold.”

Modmarket was founded in 2009 and plans on adding three new Colorado locations in the next six months, the suit says, including spots in Colorado Springs, Littleton and a second spot at DIA. It also has three locations in Texas, where Mod Pizza also operates.

Hope Hamilton, a lawyer with the firm Holland & Hart in Boulder who filed the suit on behalf of Modmarket, said that Modmarket does not comment on pending litigation.

Mod Pizza did not return a call seeking comment.

Modmarket, a restaurant that has a location on the 16th Street Mall, is taking a similarly named pizza restaurant to court. Photo by Aaron Kremer.

A Golden-based restaurant brand with locations across the state has asked a judge to intervene in its naming quarrel with a Seattle pizza shop.