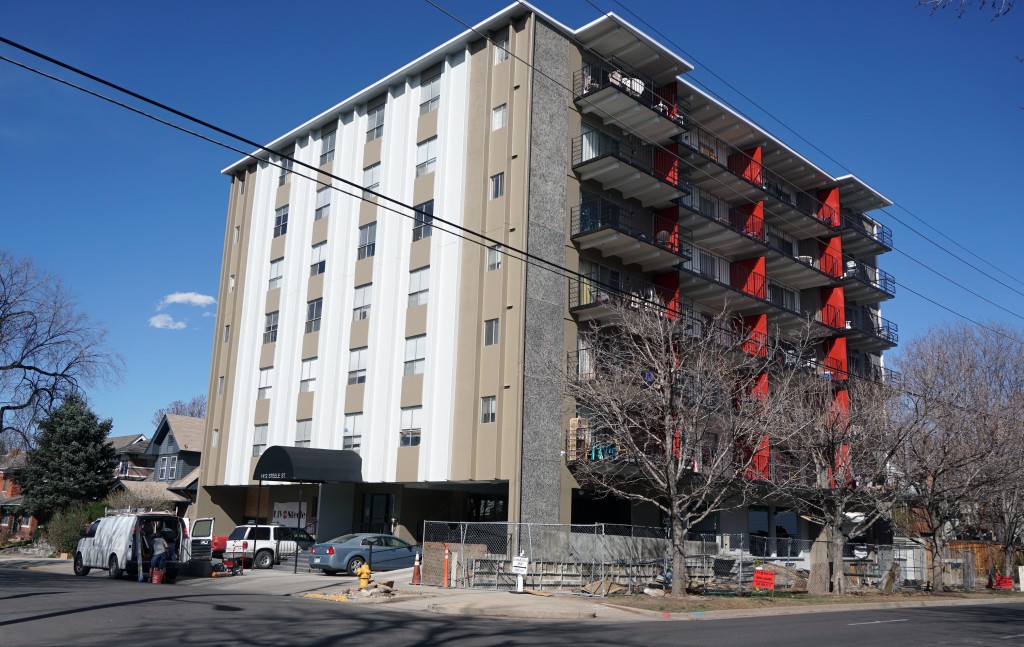 The apartment complex at 1412 Steele St. is undergoing renovations to its 50 units. Photos by Burl Rolett.

After 48 years, a Congress Park apartment tower is getting a facelift.

Baron Properties moving forward on a more than half-million dollar renovation at Liv on Steele, the 50-unit Congress Park apartment building Baron bought last year for $7.8 million. The firm is adding a new patio, cabinets, sinks and flooring at a cost of about $10,000 per apartment.

“The units just really haven’t been significantly upgraded or renovated since the building was constructed,” said Scott Fisher, a principal at Baron Properties. “We felt this was a property that would really appeal to a wide range of residents if it were upgraded and modernized.”

Baron Properties bought the seven-story apartment building in July of last year, according to city records, and began work between two and three months after the acquisition closed. The building at 1412 Steele St. totals 35,000 square feet and was built in 1969.

Liv on Steele had 50 units at the time of the sale, Fisher said. Baron Properties has since knocked out a former building manager’s apartment on the ground floor and is adding two new apartments in its place.

Plans also call for a club room and cyber cafe leading to a balcony over the building’s parking garage. Right now Baron Properties is renovating units at a clip of about five apartments per month as leases expire, Fisher said.

Renovated apartments at Liv on Steele are leasing for $1,275 for the least expensive one-bedroom apartment and between $1,670 and $1,820 for two-bedroom units. The building is almost fully leased, Fisher said, not including the handful of apartments under construction in a given month.

“We like to keep cash flow in place and do these renovations at a measured pace,” he said. “Some guys like to empty the building, and there’s certain positives and negatives to both styles, but were definitely doing the ‘take it as it comes’ approach.”

Baron Properties often carries out this type of buy-and-renovate real estate strategy and is also working on developing some for-rent and for-sale complexes in Denver and Phoenix, Fisher said.

Liv on Steele was the company’s second major Denver acquisition of 2014, after buying the Dwell Apartments near Sixth Avenue and Pennsylvania Street in January. The Steele Street project was an attractive buy, Fisher said, because the building itself was well-built with large balconies.
And it offers Congress Park residents a place to park.

“Parking in these Capitol Hill-area projects is very important, and the properties that have a one-to-one or abundant parking are very much in the minority,” he said.

The apartment complex at 1412 Steele St. is undergoing renovations to its 50 units. Photos by Burl Rolett.

After buying an apartment tower for more than $7 million last year, a real estate firm is overhauling its 50 units - the first major upgrades in the 50-year-old building's history.