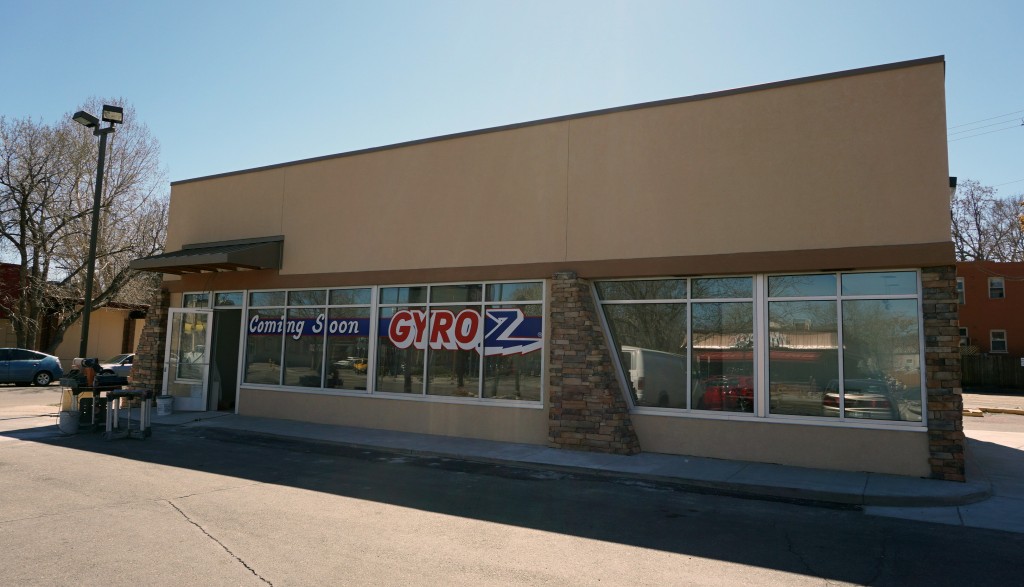 Gyroz will open on Colfax Avenue later this month. Photos by Burl Rolett.

Quick-service restaurant concepts – think Garbanzo and Noodles & Co. – are rolling into Denver faster than you can say “gyro.”

Aurora-based restaurant Gyroz is preparing an East Colfax building for its second location, with hopes for five more and an eventual franchise.
Gyroz representative Chris Andrianakos said the new shop will try to capitalize on the lively late-night and weekend crowd at its 880 E. Colfax Ave. shop.

“That area is expanding,” said Andrianakos, the son of Gyroz owner John Andrianakos. “It’s going to be really neat once all the new restaurants around there open and you’ve got the Fillmore right across the street.”

If build out comes along on schedule, Gyroz will open on East Colfax near the end of April. Gyroz offers a simple menu, Andrianakos said, with four different sandwiches that come with fries, and a lineup of salads. A gyro with fries and a drink costs about $8 at the Aurora shop at 13698 E. Iliff Ave.

The elder Andrianakos, acting as 880 E. Colfax LLC, bought the property for the second Gyroz store in October 2013. Denver records show he paid $425,000. The property sits on 0.16 acres at Colfax Avenue and Emerson Street, and Gyroz is remodeling a nearly 50-year-old, 1,500-square-foot building on the site.

Andrianakos said he is paying to build out the second location in cash, but could not say precisely how much Gyroz was investing in the store.

While Gyroz readies its second location, the Andrianakos family already has an eye for more stores, and eventually hopes to franchise the concept. Andrianakos said there is not yet a firm timeline for adding a third Gyroz but said they would like to open five before franchising.

Even before opening the first Gyroz, Andrianakos said the company designed the shop with a mind to make it easy to do over and over again – from the four-gyro menu down to the paint on the walls.

“When we were doing the layout, especially in the front of the store, we wanted every location to look the same have all the same color schemes, all of that,” he said. “We have all-tile floors, beautiful granite countertops in the front where you order food. But it’s easy to replicate.”

Gyroz will open on Colfax Avenue later this month. Photos by Burl Rolett.

The boom in Chipotle-style restaurants is pushing an Aurora sandwich shop into Denver, and its owner already has plans to expand and eventually franchise the concept.