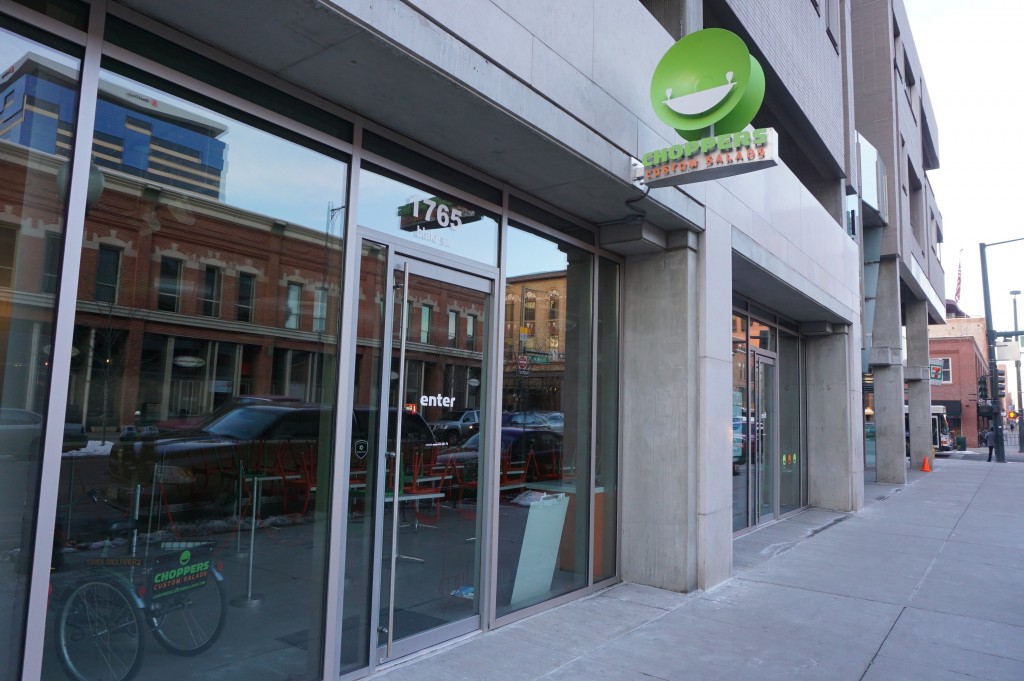 Choppers Custom Salads on Blake Street closed in February but is set to reopen in the coming months. Photo by Burl Rolett.

“We were out with a couple brokers looking for a location for a pizza restaurant, and we walked into Choppers and immediately fell in love with the interior,” Beckley said. “We thought it would be a travesty to tear it all up and have to remodel it for a pizza place.”

Beckley said he is working on finalizing a new lease for the old Choppers at 1765 Blake St. If everything goes according to schedule, Choppers will reopen at the 2,280-square-foot space in May with an expanded menu and a catering operation Beckley said he hopes will boost profits.

The sale of the business was finalized earlier this month. Neither O’Neill nor Beckley would disclose the price. Beckley is funding the venture with personal savings.

Choppers will be Beckley’s first go at owning a restaurant. He’s worked in the industry for seven or eight years in both front- and back-of-house gigs and looked into buying into a franchise before coming across Choppers.

Beckley said franchising was appealing because the business would come with a road map. But Choppers, Beckley said, gave him a chance to buy into a brand without oversight from a parent company.

“That’s something that was attractive about the brand: it’s already operating and has an existing fan base,” he said. “It has all the trappings of a franchise without the corporate structure – if we want to change the menu, we can change the menu, or add a special.”

Choppers Custom Salads closed its two locations on Blake Street and in the Denver Tech Center over the last few months after about six years in business. The company’s lease expired at the Tech Center last year, O’Neill said, and the Blake Street location’s lease had nearly run out when that shop closed in February.

O’Neill said Choppers always made a profit, but not enough green to keep the restaurants up and running. He’s also working on starting Avanti Food & Beverage, a seven-restaurant food hall scheduled to open in LoHi around May.

“I would have kept Choppers going myself, but I was stretched a little thin,” he said. “The margins were just too small in the Tech Center location – and it paralleled downtown to an extent, too – too small to stay open and to justify the time spent.”

Beckley has some tweaks in mind for the Choppers concept. For starters, he’s planning on adding breakfast items and sandwiches and wants to tap into the happy hour crowd by adding beer and wine.

Beckley also plans to build a catering and delivery business at Choppers and wants to begin canvassing offices downtown for large daytime orders.

He said he would like to expand in the future but doesn’t have any immediate plans for adding a second Choppers.

“We really want to get the Blake Street location popping and on fire before expanding,” he said.

Choppers Custom Salads on Blake Street closed in February but is set to reopen in the coming months. Photo by Burl Rolett.

A first-time restaurant owner is forgoing his plans for a pizza restaurant to save a LoDo salad concept from the chopping block.