An heiress to a shopping mall fortune has sued the IRS for a $21 million tax refund.

Simon is a major landowner in Carbondale and lists the Western Slope town as the headquarters of the Melvin and Bren Simon Foundation, which donated several hundred thousand dollars around that region in 2013, according to tax documents.

The tax dispute stems from the interpretation of a deal that Mel Simon struck with his brother, Herb, around 2009. The two brothers jointly owned the Indiana Pacers, and because of poor play, an infamous mid-game brawl in 2004 and bad press, the team needed tens of millions a year in extra cash, the suit claims. Bren Simon lawsuit 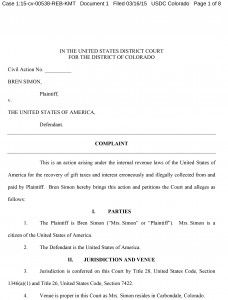 Mel Simon approached his brother about selling the team in 2007, but Herb refused, the suit says, and wanted to remain in charge of the team. After years of back-and-forth, the two agreed to a restructuring of the business.

Mel and Herb Simon agreed to reorganize the Pacers ownership in a deal that allowed Mel stop pouring cash into the team, the suit says.

The IRS, the suit alleges, viewed that deal between the brothers as a gift, and sent Bren Simon, Mel’s widow, a bill in 2013; Mel Simon died September 2009. An IRS attachment to the lawsuit values Mel Simon’s gift at a total of $83 million.

Bren Simon paid her $21.4 million bill under protest last year and then filed an appeal, which was denied.

The lawsuit claims that there was no gift and that Bren Simon should get a refund.

The complaint claims the IRS shouldn’t have classified the Simons’ agreement as a gift because the reorganization of the company “was made in the ordinary course of business, bona fide, and free of any donative intent.”

“The IRS is arguing that what Mel received was worth less than what he gave up,” said John Porter, a lawyer with the Houston firm Baker Botts who filed the suit.

“But no money that changed hands,” Porter said, adding that he has not seen a calculation from the IRS about how it valued what was determined to be a gift.

A spokeswoman for the IRS said the department doesn’t comment on pending litigation.

Bren Simon resides in Carbondale, according to the lawsuit.

A Carbondale woman and widow of a real estate billionaire filed a suit in Denver this week against the U.S. government. Her $21 million claim stems from an agreement that her late husband made in order to walk away from ownership of a struggling NBA team.