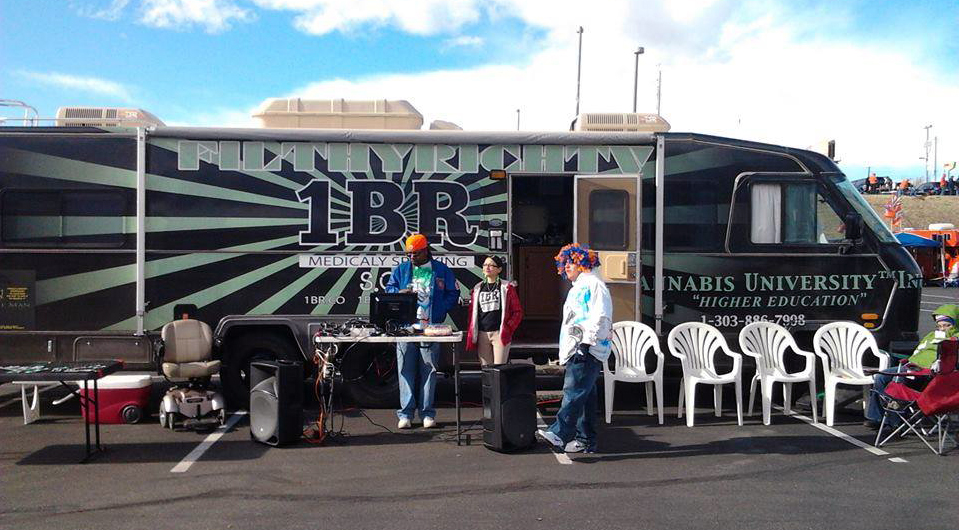 Three marijuana advocates are again battling the Denver Broncos in court, alleging that the team violated their First Amendment rights in 2014 when it banned their cannabis-themed RV from a lot at Sports Authority Field.

Plaintiffs Michelle LaMay, who operates Cannabis University, along with Raynard Hugee and Freddrick Moore sued the Broncos in U.S. District Court last week. They claim that they were unconstitutionally barred from expressing their political views in a public place, specifically with an RV painted with the Cannabis University logo.

LaMay paid $4,000 to paint the RV with the name Cannabis University, her marijuana instruction business.

A case filed last year by LaMay – who acted as her own lawyer – was dismissed. That case, according to a Westword article, was filed in a different court and made different claims against the Broncos.

“The parking lot at stadium is owned by the public,” said David Lane, a lawyer with the firm Killmer, Lane & Newman, who filed the new suit. “It’s not up to Denver Broncos to have their puppets in Denver police decide what free speech methods pass muster in a public space.” 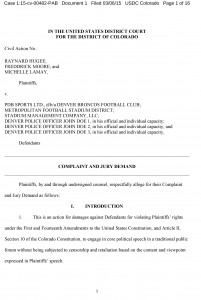 In addition to the Broncos, the suit also names Stadium Management Co. and Metropolitan Football Stadium District, as well as three police officers, as defendants.

A spokesman for the Broncos said that Stadium Management Co. will be responding to the suit but that it had no further comment.

According to the lawsuit, at around noon on Jan. 12, 2014, agents from SMC and the Denver Police Department ordered the RV’s occupants to cover the word “cannabis” or immediately drive the vehicle off the lot.

Because the tailgaters didn’t have anything to cover the RV, they left the stadium.

The following week, before a game against the New England Patriots, Hugee and Moore tried to park the RV with the word covered and were denied access to the parking lot, the suit claims.

The suit alleges that “Defendants’ restrictions on Plaintiffs’ speech were manifestly indefensible because they were based on its content and viewpoint, took place in a traditional public form, and were motivated by a desire to silence one side’s message in a serious and ongoing national debate regarding the legalization and regulation of medical and recreational marijuana.”

When reached by phone, LaMay said she was upset that her friends were humiliated.

“I have high hopes that Denver Broncos will be punished for their discriminatory attitude toward the word ‘cannabis,’” LaMay said.

Three marijuana advocates are again battling the Denver Broncos in court, alleging that the team violated their First Amendment rights in 2014 when it banned their cannabis-themed RV from a lot at Sports Authority Field.