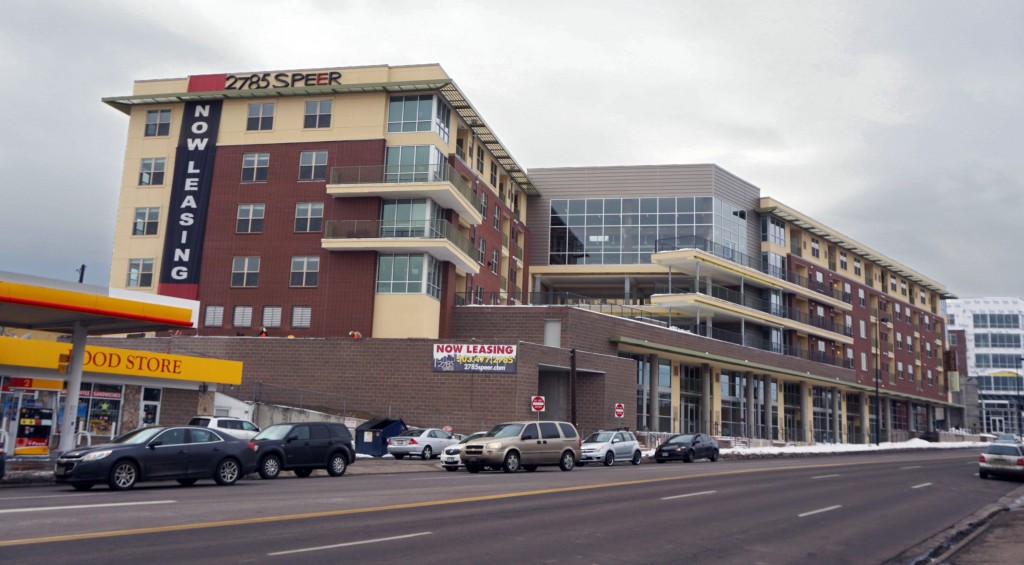 The apartments at 2785 Speer Blvd. will eventually have more than 300 units. Photo by Burl Rolett.

The first residents are moving in at a gargantuan Highlands apartment project.

2785 Speer welcomed its first tenants in late January and has leased about 25 of more than 300 planned apartment units so far.

“We’ve picked up quite a bit since we got into the leasing office in late January,” property leasing specialist Morgan Heinz said. “Things are going well – we’re very busy.”

Construction is still underway on the first phase of the project that includes slightly more than 100 apartments. Another 210 apartments are scheduled to come on to the market in a second phase this summer, Heinz said.

So far the building’s two-bedroom units have been the most popular, which Heinz said did not come as a surprise. To draw in tenants while crews continue to hammer away, the building is offering a month’s worth of free rent on year-long leases.

“It’s a construction special,” Heinz said. “Since all the amenities aren’t quite open yet, we are offering that free month.”

The apartment complex is a joint venture between Amstar and Allied Realty Services. The five-story building broke ground in May 2013. Houston-based architect Meeks + Partners designed the complex, and Martines Palmeiro Construction is the general contractor.

The apartments at 2785 Speer Blvd. will eventually have more than 300 units. Photo by Burl Rolett.

With construction still underway, a 300-unit apartment project in the Highlands is opening its doors to its first residents.