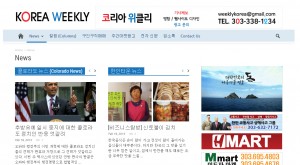 Korea Weekly is being sued for defamation.

Two competing Korean-language newspapers are taking their rivalry to court.

The publisher of Weekly Focus sued the publisher of Korea Weekly this week in Arapahoe County Court, alleging defamation and deceptive trade practices.

Several of the allegedly offending statements, translated from Korean, include:

–    “The Plaintiff’s editor ‘distorted report leaves suspicion that she wants to take a reflexive benefit to her relatively sluggish sales.’”

–    “The Plaintiff’s editor is ‘a person with a dual personality’”

The Weekly Focus (the plaintiff) claims that its ability to function as a newspaper depends on the trust or readers and potential readers.

Mark Lyda, from the Lyda Law firm, filed the suit on behalf of Weekly Focus and declined to comment.

Korea Weekly also declined to comment when reached by phone.

Korea Weekly is being sued for defamation.

The papers are taking their rivalry to court after one called the competing publication's publisher “a person with a dual personality.”