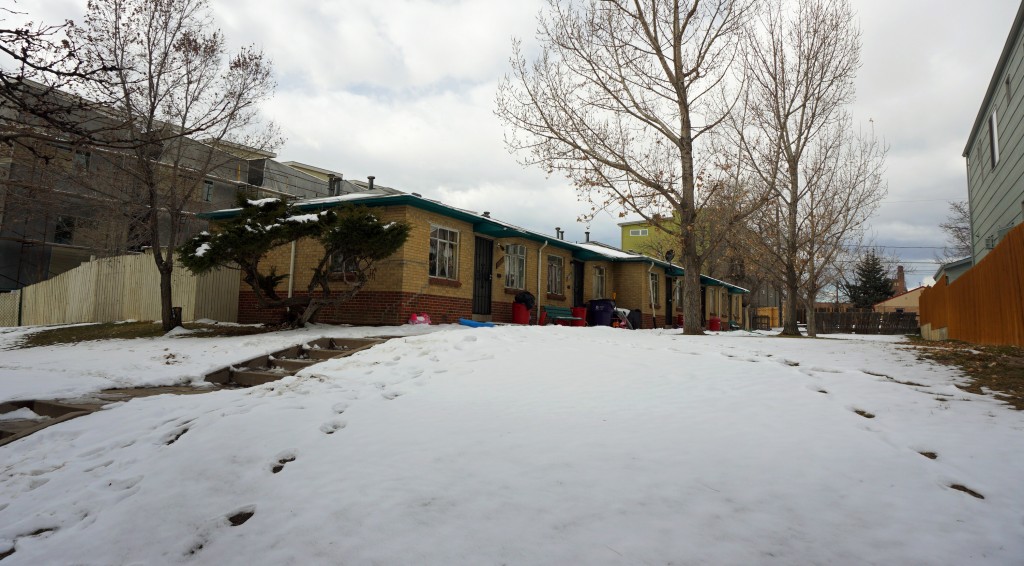 A developer and home builder is planning to build a new apartment building at 1821 N. Irving St. Photo by Burl Rolett.

Lance Nading wants to squeeze 30 apartments – complete with a concierge – on 0.4 acres at 1821 N. Irving St. He’s betting on drawing renters who want a single-family neighborhood less dense than LoDo or LoHi but who are still looking for a top-end, new apartment.

“I’ve compared it in some ways to a New York-style building – where the doorman knows your name,” said Nading, who is also a custom home builder.

Plans call for one three-story building with one level of underground parking. The site currently hosts a 50-year-old, one-story apartment building.

Nading bought the property in 2013 for $400,000, according to Denver records. He initially planned to build townhomes, he said, but reasoned an apartment complex would give him some security in case of an economic downturn.

And at least two other major residential buildings are taking shape in the neighborhood. Trammell Crow is proposing about 378 apartments at 16th Avenue and Raleigh Street. And the Denver City Council this month approved rezoning for a 12-story condo tower at 17th Avenue and Stuart Street.

But Nading said the smaller apartment building he wants to build – and one with amenities like a concierge who could arrange dry cleaning, transportation or even a chef for the night – doesn’t exist in the neighborhood.

And bringing on a different concept has its own set of difficulties, like finding investors and a bank.

“The challenge from an underwriting standpoint is financing a project that has virtually no comparables,” he said. “We’re not an eight-story, 220-unit, fully-amenitized building that you can get numerous comparables around town.”

The apartment units at Nading’s unnamed project would be a mix of one- and two-bedroom units averaging 850 square feet. The building will also have a small rooftop pool, a small conference room and a dog wash station.

Nading said he thinks it will appeal to established professionals who may have just moved to town and need a place for the short-term. He’s also targeting older renters who want a low-maintenance home in a residential neighborhood and are willing to trade nearby bars and nightlife for more in-house services.

Rental rates haven’t been finalized yet, but Nading said he’ll need to get about $2.20 per square foot per month to make the apartment project work. That would put rents at around $1,870.

“It doesn’t work unless we can get $2.20 a square foot, and then it works – doesn’t hit it out of the park, but it works,” he said. “It’s certainly not Cherry Creek, it’s not LoHi, but it’s a unique enough situation that I think that it has the potential to do very, very well to drive and push higher rents.”

Should Nading go through with the apartment development, he’ll outfit the units so they can sell as condos later on.

It would be a more enticing project, he said, if he had the flexibility to sell the units at any time instead of holding off for fear of a lawsuit under construction defects laws.

Nading has enlisted RMT Architects to draw up plans for the building and has submitted a preliminary site plan to Denver’s Development Services office but doesn’t have a ground-breaking date or a final construction cost worked out.

Nading said he could still go back and build townhomes instead if he decides the apartment complex wouldn’t be profitable enough.

“I want to do everything I can to get it out of the ground, but at the end of the day, the numbers have to work,” he said. “I don’t want to be my own worst enemy.”

A developer and home builder is planning to build a new apartment building at 1821 N. Irving St. Photo by Burl Rolett.

A local developer is trying to get plans off the ground for a small, high-end apartment building - complete with a concierge - in Sloan's Lake.