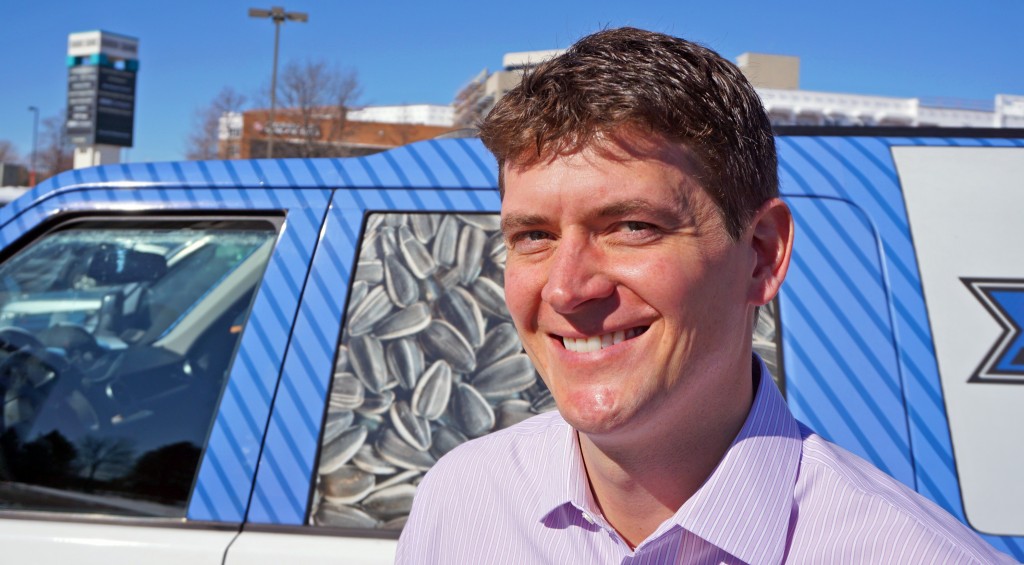 Mark Pettyjohn is picking up production on his sunflower seed business. Photos by Burl Rolett.

A Denver startup started by three Kent Denver classmates wants to bite into a bigger piece of the healthy snack market.

Greenwood Village-based Chinook Seedery aims to get its all-natural sunflower seeds in every western state this year and boost its sales from $150,000 in 2014 to $1 million in 2015.

To handle more volume, the year-old company struck a deal with a Colorado roaster to ramp up production of its four sunflower seed varieties. It has been working with a smaller roaster in South Dakota.

“There has been a lot of interest, and our current roaster just can’t produce enough anymore,” co-founder Mark Pettyjohn said. “We didn’t know these sought-after accounts would be so excited to not only carry us, but to feature our products in their stores.”

Chinook, co-owned by Pettyjohn, fiancee Jana Berglund and her brother and former Rockies player Bret Berglund, will sell a portion of the business to its new Colorado-based roasting company. Pettyjohn declined to give the name of the roaster.

Pettyjohn, 33, is a University of Denver graduate and worked in his family’s overhead door business before launching custom garage door shop Grand Timber Doors. Three years ago, Pettyjohn looked to start a new business of his own outside the door industry.

He said sunflower seeds were a favorite, but he came up empty-handed when he started to look for a healthier version of the salty snack. 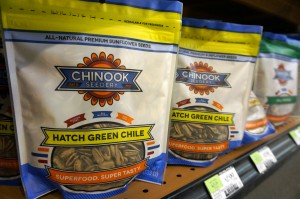 Chinook currently has four seed flavors and is working on a fifth.

“I went into Whole Foods because I was trying to watch what I was eating and realized there was no all-natural sunflower seed on the market,” he said. “They had taken something that should have been healthy and turned it into kind of a junk food.”

Pettyjohn planted the seeds for Chinook in his kitchen in 2012. He bought a 50-pound bag of seeds and cooked up different batches to taste test with friends.

Chinook did about $150,000 in sales from its launch through the end of last year, Pettyjohn said.

He said he’s hoping increased production and wider distribution will boost that number to more than $1 million by the end of 2015.

Pettyjohn said Chinook is in about 50 Whole Foods locations and several independent grocers throughout the Rocky Mountains and the Pacific Northwest. The seeds wholesale for a little less than $2 a bag and retail for about $3.

Pettyjohn said he expects to be in Whole Foods stores farther down the West Coast and into the Southwest by June. Chinook is moving into 13 Lucky’s Market stores in May and is aiming to sell sunflower seeds in every state in the Western U.S. by the end of the year.

The seeds themselves come from farmers along what Pettyjohn called the “sunflower seed belt,” stretching from the Dakotas and Minnesota down through Colorado and Kansas and dipping as far south as Texas.

Chinook will begin roasting seeds at the new roaster’s Colorado location in a couple of weeks.

A product line expansion is also in the works, and Pettyjohn said he’s aiming to have a fifth flavor on the market by this summer. He’s also tossed around the idea of getting into pumpkin seeds or an unshelled sunflower seed salad topper.

While the company looks to grow its reach geographically, Pettyjohn said he plans to stick to the Whole Foods-type shops instead of trying to compete on the same shelves as mass-produced heavy-hitters like David or Frito-Lay.

“Rather than branch into convenience stores, we believe we can expand to more products and stay in the natural food stores,” he said.

Mark Pettyjohn is picking up production on his sunflower seed business. Photos by Burl Rolett.

An entrepreneur is growing his healthy snack startup, hoping to plant his product on store shelves across the region and push revenue to more than $1 million.