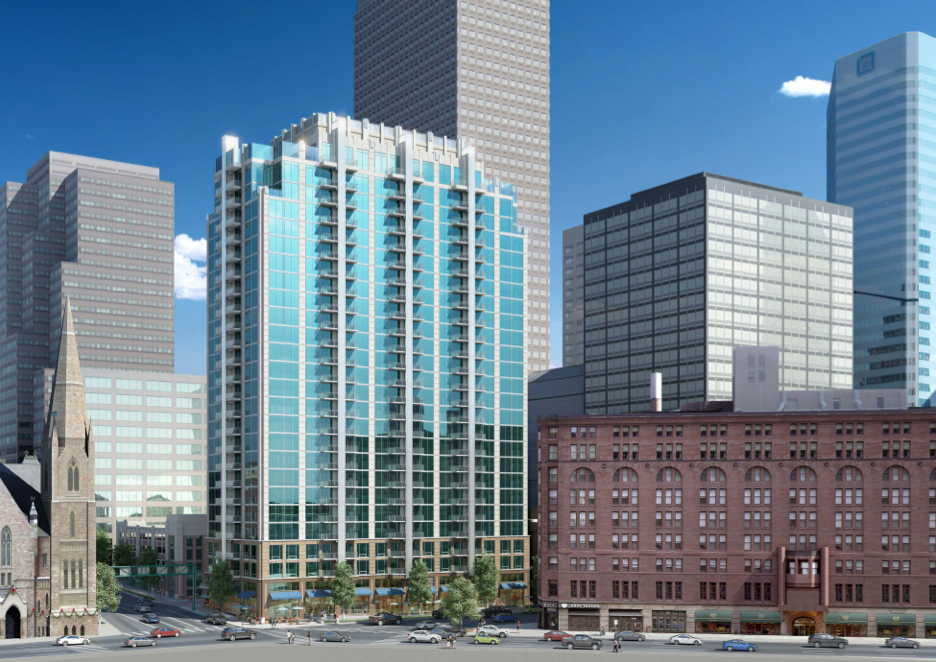 A 24-story apartment building is planned for downtown. Rendering courtesy of Novare Group.

A planned downtown tower is ready to go skyward.

Denver’s SkyHouse will cost more than $100 million. Rooms will range from 600-square-foot studios to two-bedroom units at about 1,050 square feet. The property will have three ground-floor retail storefronts totaling 6,900 square feet.

SkyHouse will take about 15 months to build, and Borders said rental rates will likely start at about $2.50 per square foot when apartments come on the market next spring. That puts rent at about $1,500 per month for the smaller units and $2,600 for larger units. 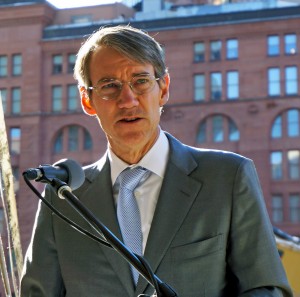 The building will feature a top-floor common area – known as the SkyHouse – with a club room, swimming pool and fitness center. Plans also call for floor-to-ceiling glass, stainless steel appliances and granite countertops, all of which Borders said are major selling points for younger renters.

Novare Group settled on the 18th and Broadway site because it was the right size for the SkyHouse model, Borders said, and it was a good location straddling the Uptown neighborhood and the central business district.

SkyHouse’s renters, he said, prefer to look out their windows to the downtown towers rather than take in the full skyline view from an apartment on the outskirts of the city center.

Smallwood, Reynolds, Stewart, Stewart & Associates designed SkyHouse Denver. Batson-Cook Construction and Swinerton Builders are the general contractors, and J.P. Morgan and U.S. Bank are financing the construction.
This will be the first SkyHouse for Denver-based Swinerton.

The 14 SkyHouse projects across the country have cost more than $1 billion in development.

Most recently, the roughly 1.3-acre SkyHouse site was a surface parking lot. And the property was previously home to the Cosmopolitan Hotel, a 12-story hotel that was built in 1926 and demolished in 1984. Leftover steel and concrete is still lodged in the ground at the SkyHouse site.

A 24-story apartment building is planned for downtown. Rendering courtesy of Novare Group.

A 24-story building is on the rise downtown, and the apartment concept - which has been replicated in cities across the country - will include top-floor amenities and three retail storefronts.