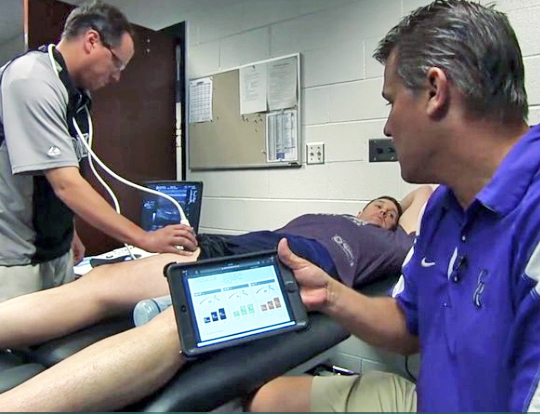 A Denver startup wants to muscle its way into the training room of college and professional sports teams.

Glendale-based MuscleSound has invested $4.3 million into a business that sells software for athletic trainers to monitor athletes’ glycogen levels, the main fuel source for muscles. When glycogen is low, athletes don’t perform as well and are at a greater risk for soft tissue injuries like strains and pulls.

The measurements, which are uploaded from a standard ultrasound scan to MuscleSound’s software, help trainers make sure an athlete is in optimal shape for competition. Injured muscles don’t retain glycogen, so a low reading is a warning sign of damaged tissue, recovering muscles prone to injury or even bad nutrition.

“You have to imagine what that’s worth to a team  to not have soft tissues injuries … it means more wins, more tickets sold and maybe the difference of making the postseason,” MuscleSound CFO David Ramich said.

The company, which has 10 employees including its own software engineers, plans on raising another $2 million this year and hopes to break into the black by the end of 2015.

Ramich said MuscleSound recommends teams test athletes a few times per week, a few hours before a game or practice. If their glycogen levels look low, a trainer may recommend a starchy meal or a quick burst of high-sugar food if a game is close to kickoff.

The glycogen test can also be used to assess when the athlete is ready to go back on the field after recovering from an injury. 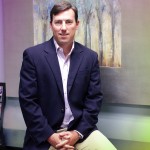 “Eighty percent of guys that are screened are OK. We need to focus on the 20 percent,” Ramich said.

The company was lunched by Stephen Kurtz three years ago after the serial entrepreneur and distance runner heard about two doctors at the University of Colorado who were able to see glycogen in the muscles using ultrasound.

The company has 10 clients, including the Colorado Rockies and the University of Colorado athletic department.

“Trainers know a lot of times when something isn’t right with players. A player may be sluggish or not performing the way the normally do,” Ramich said. “This is the first time the trainer can test (the athlete) and see the results of the glycogen.”

One of the biggest challenges for the startup is getting in front of management staff who control the purse strings, Ramich said.

“The vast majority of time, trainers are not the people who have the budget to really purchase MuscleSound – they’re really tasked with trying to get injured athletes back on field rather than trying to prevent injury,” Ramich said. “Ideally what we need to be doing is making a sale proposal to the front office.”

Ramich said he also sees MuscleSound flexing into areas outside the trainer’s room.

The company has made one sale to a sports medicine group in North Carolina and plans to keep pushing hard into doctor’s office and eventually hospitals.