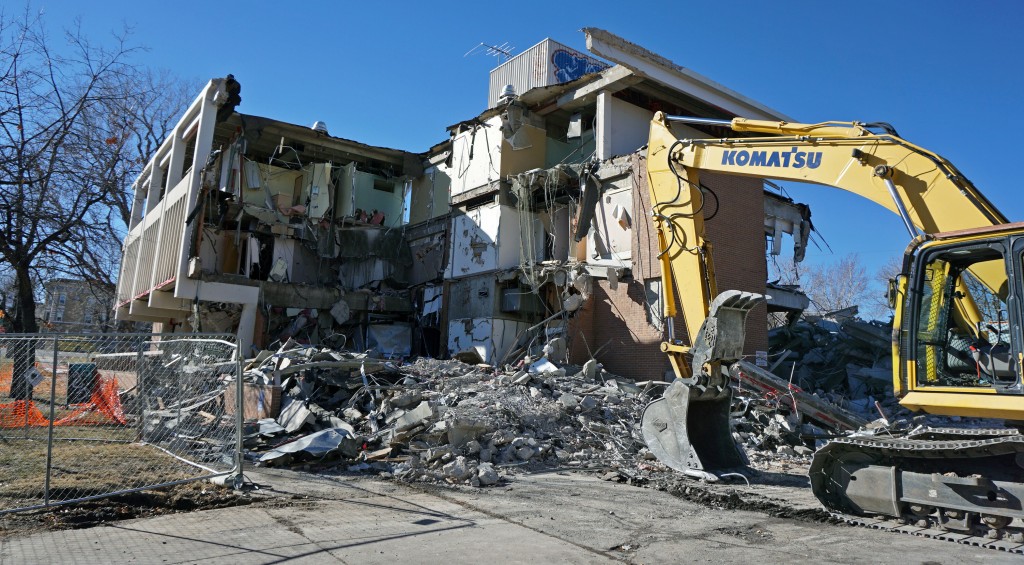 An office building is being torn down at 17th and Lafayette avenues. Photo by Burl Rolett.

A City Park developer isn’t sure what he wants to build at 17th and Lafayette avenues, but he’s moving ahead with the demolition of the site’s current building.

Pat Henry considered several different redevelopment plans but has yet to decide what to do with the land. He said he is razing the lot’s office building now to save on property taxes and eliminate the liability of owning such a large, vacant building.

Henry said he likes the space for a condo development, but the construction defects law has kept him from pulling the trigger. The property is zoned for up to an eight-story building.

The office building has been empty for about three years, Henry said. Its previous owners had pitched the property for a medical office and retail redevelopment called 17th Street Pavilion before selling in June 2014.

Henry also bought the CoMedia and Marion Street Tattoo buildings next door for $1.2 million in December. The tenants at those smaller, one-story buildings will stay in place for at least another year, Henry said.

The two 17th Street properties are at least the second City Park West real estate project Henry has planned. He also owns the Ascent Uptown apartment building at 17th and Franklin, which has 22 apartments and hosts restaurants Olive & Finch and Patxi’s on the first floor.

An office building is being torn down at 17th and Lafayette avenues. Photo by Burl Rolett.

A developer is tearing down a vacant office building in City Park as he weighs redevelopment options for the site.