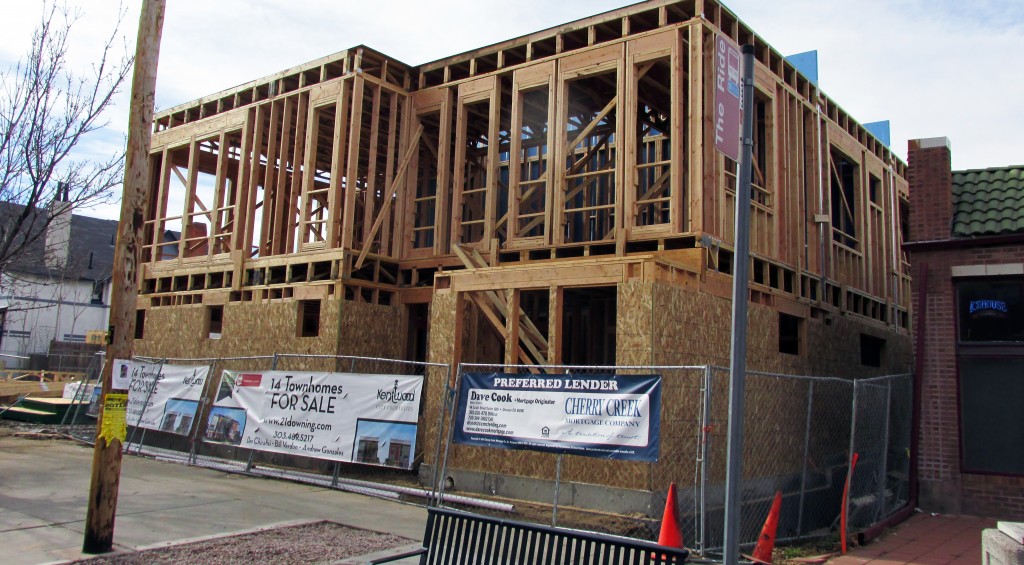 Fourteen townhomes are in the works on Downing Street. Photo by Burl Rolett.

A Denver architect is wearing the developer’s hat on a City Park townhome project.

A set of 14 new townhomes is on the rise along Downing Street between 21st and 22nd avenues. The project, developed and designed by Paul Bergner’s firm Studio PBA, will come online in two waves over the summer.

“We’re at about a 25-year low on inventory right now,” Verdon said. “There are lots of buyers, but they can’t find anything, and sellers are sitting on their properties longer. Buyers are kind of stuck.”

The townhomes will come up in two main buildings. Verdon said the first, on the northern side of the lot, is scheduled to be completed in June. The other half of the project will be ready toward the end of the summer.

Verdon said two of the townhomes are already spoken for. About half of his calls on the property are coming from employees at the nearby St. Joseph Hospital that opened at the end of last year on 19th Street.

Townhomes around the City Park West, Uptown and Five Points areas have been in high demand, Verdon said. He mentioned a row of townhomes at 22nd and Emerson that sold out for between $615,000 and $775,000 about three years ago, only to have the most expensive unit resell for $848,000 last summer.

Verdon also referenced a set of six recently completed townhomes at 22nd and Washington, about four blocks from the Downing Street site, where homeowners were ready to move in before contractors moved out.

“They sold out there before the end of construction,” he said. “In this market everybody wants something finished, and as the framing is coming up (on Downing Street) we’re getting more calls.”

Fourteen townhomes are in the works on Downing Street. Photo by Burl Rolett.

A Denver architecture firm is trying its hand at development with a 14-townhome project on Downing Street.