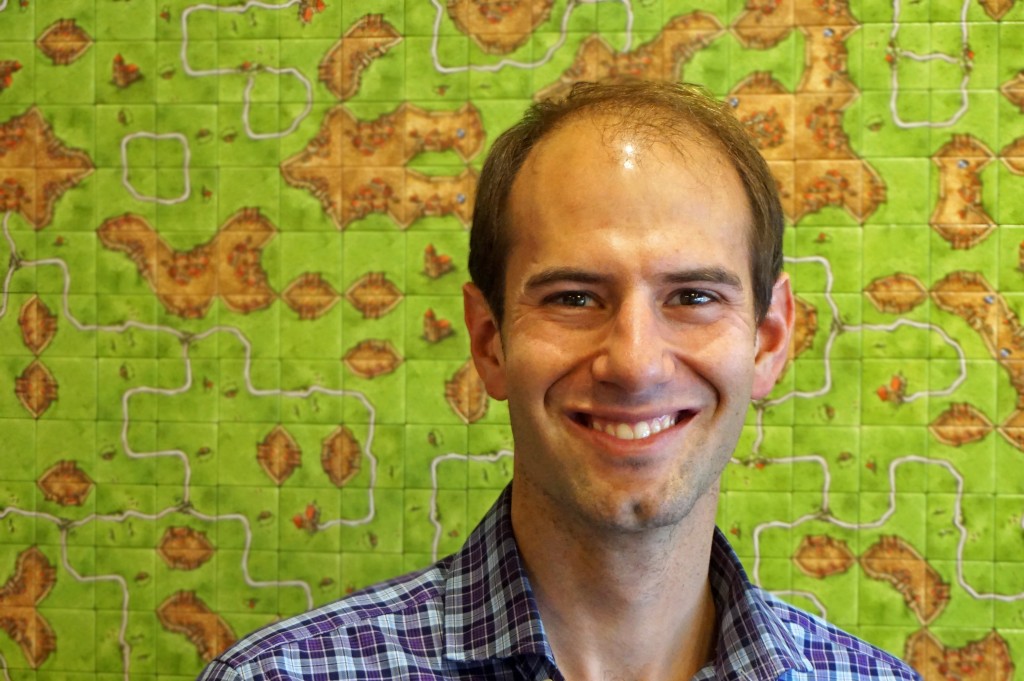 Nathan Stern is expanding his coffee and board game concept. Photo by Burl Rolett.

After three years of peddling coffee from a truck, Nathan Stern is rolling the dice on a board game cafe.

Stern, who also works as a commercial real estate broker, paired up with The Bagel Store owner Beth Ginsberg to launch Gathering Grounds Café and Board Games near the Denver Tech Center. They have another location in the works for West Colfax.

Gathering Grounds combines a coffee shop and kosher cafe with by-the-hour board game rentals and a selection of board games for sale.

“We initially wanted to do a game shop instead of a coffee shop, but we didn’t want to just have something someone could buy cheaper online,” Stern said. “Coffee is a very proven concept. The market for board games is growing as well, and the board game cafes that do exist have been very successful.”

Gathering Grounds has about 200 board games for in-store play at $5 an hour and another 100 games for sale. The company opened its first store at 8923 E. Union Ave. in Greenwood Village last month and has another slated to open this summer on West Colfax.

The board game cafe is an idea Stern said he’s been working on for three years. He said he noticed concept catching on around 2010, and he took cues from Toronto store Snakes and Lattes that opened that same year.

But at the time, he had no money to open a coffee house and no experience running a business. 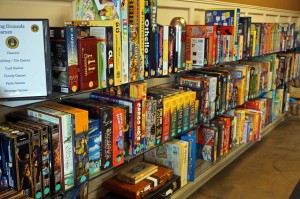 Gathering Grounds has about 200 games to play in-house.

“No one wanted to invest in us, and no landlord wanted to give us a lease,” he said.

To pick up entrepreneurial experience, Stern took to the road with a coffee truck selling Pueblo-based Solar Roast coffee. Ginsberg was one of Stern’s suppliers for the mobile coffee business.

The store manager at Gathering Grounds in Greenwood Village also owns a stake in the shop, as do three investors Stern said are family and friends.

Stern said the first two stores will cost about $250,000 to open combined. About two-thirds of that will come from investment money, and the rest is being funded with a bank loan.

Stern said negotiating the lease at 5004 W. Colfax Ave., a building owned by the Colorado Coalition for the Homeless, took about two years. But the deal came with a major perk: Gathering Grounds will get the space rent-free if it staffs the shop with workers from the nonprofit’s employment program.

Right now Gathering Grounds has 16 employees, including Stern and Ginsberg. The shop anticipates hiring 12 more at the West Colfax location.

Stern said he’d like to open a third Gathering Grounds in the business’ second year and said the Hilltop neighborhood would be a good spot.

Both of Gathering Grounds’ current coffeehouses total about 1,500 square feet each.

Gathering Grounds won’t be the first hybrid game and coffee house to open in the Denver area. Enchanted Grounds opened about eight years ago in Highlands Ranch, and founder Jeff Kokx said revenue has grown each year since its founding.

He said board games seem to have grown in popularity in the last couple of years. He attributed the trend to a growing presence of games in popular culture and said people may have also flocked to board games as an inexpensive pastime. 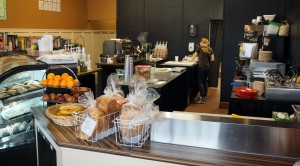 Stern anticipates that about 70 percent of revenues will come from food and drink sales, with 20 percent coming from board game rentals. Gathering Grounds will make the remaining 10 percent selling the games.

Even though food sales will carry the business, Stern said the board game focus is what sets Gathering Grounds apart. Should the concept take off, he said hopes to add a sort of board game hub downtown where players could sketch up board games of their own and build models to pitch to potential investors.

“In theory, they could make a really polished prototype that would be ready to show to a board game company,” Stern said.

Nathan Stern is expanding his coffee and board game concept. Photo by Burl Rolett.