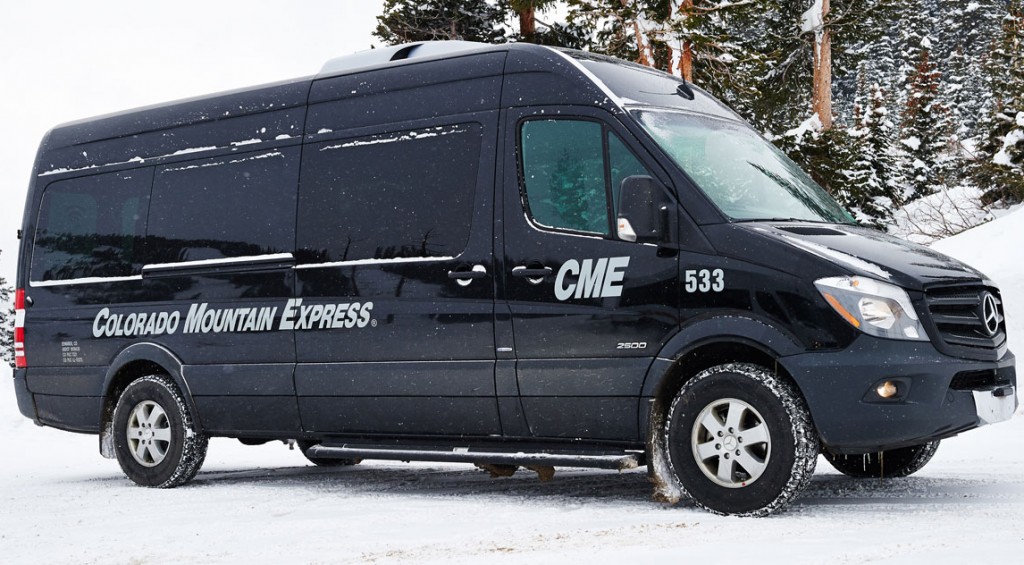 A transportation service is adding to its garage. Photo courtesy of CME.

The Colorado Mountain Express vans shuttling tourists up and down Interstate 70 hit a growth spurt.

The transportation company, which is owned by Vail Resorts, has added another 20 Mercedes Sprinter vans for this ski season. The shuttle company now has 49 Sprinters out of a fleet of 260, according to John Dawsey, the director of sales and marketing.

And those Sprinters have wireless Internet and a lot more headroom than the old standby 15-passenger vans.

“Guests comment that they love the spaciousness of the vehicles (a person 6’4 can stand upright while in the Sprinter). And they love the large windows for great views of the mountain scenery,” Dawsey said in an email.

Reached by phone, Dawsey said that the Sprinters are also sturdy in foul weather.

“They are diesel, so they have good torque,” he said. “That translates into decent power over the passes even fully loaded … Our drivers love them.”

Colorado Mountain Express, which was purchased by Vail in 2008, employs 300 drivers during the winter to serve all its markets, which include pickups and drop-offs at DIA, Eagle Airport and Aspen Airport.

A transportation service is adding to its garage. Photo courtesy of CME.

The Colorado Mountain Express vans shuttling tourists up and down Interstate 70 hit a growth spurt.