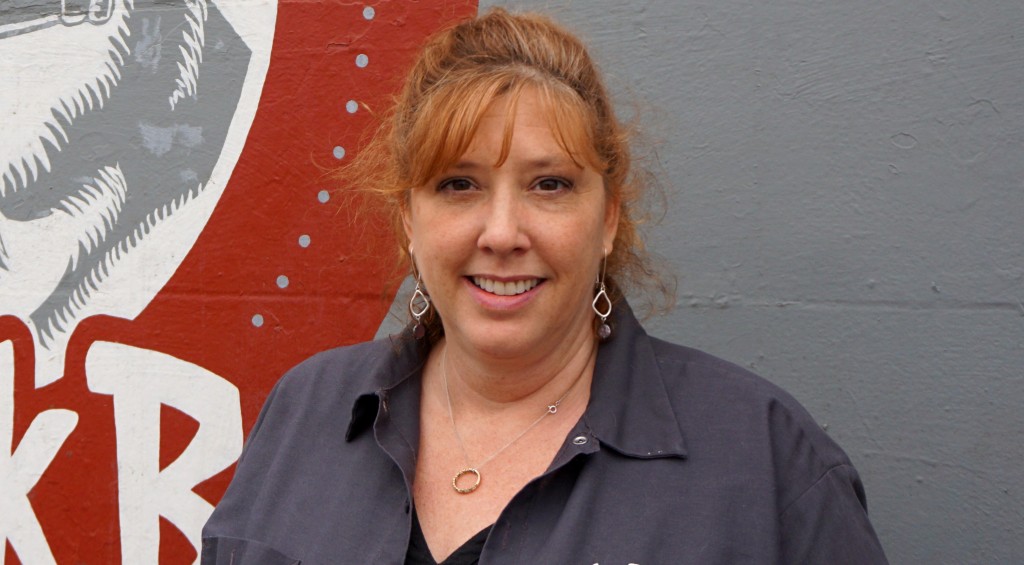 Catherine Peters of the Bark Bar is hoping to open a new location. Photo by Burl Rolett.

A local entrepreneur is locking her dog-centric bar concept back in its kennel – for now.

The Bark Bar on 38th Avenue in Berkeley will close Thursday, but owner Catherine Peters is digging into plans for a new location. She has some changes and a new location in mind, but first the Bark Bar needs cash to start up a new location and pay legal fees after a six-month zoning feud.

“I think it’s obvious that the public at large wants this,” she said. “But we’re a mom-and-pop, this was our first year in business. If we don’t pay it off, there will be no Bark Bar Two.”

Peters opened the Bark Bar on Christmas Day 2013. It’s a hybrid bar and dog park concept with small indoor pub for the humans and a fenced-in dog yard for their four-legged companions.

But about three months later, Peters got a cease and desist letter, and six months after that, the city’s zoning administrator ruled that the Bark Bar’s dog yard was not permitted under the property’s zoning.

The Bark Bar was given until Jan. 16 to remedy the issue, and this Thursday, Jan. 15, will be its last day.

But Peters isn’t ready to let the concept die. She’s aiming to open a second pooch pub – Bark Bar Deux: the Re-Poo, she called it – and she’s zeroing in on a spot in Wheat Ridge just west of Denver in Jefferson County.

But a lack of cash could keep Peters from unleashing the new spot.

Peters said she owes about $25,000 in legal bills after hiring a land use attorney to represent the bar. The company has launched a crowdfunding campaign on GoFundMe.com and has drummed up about $6,000 for the legal fund, Peters said.

Peters is also seeking investors to start the second Bark Bar. She didn’t say precisely how much cash she wants to raise, and said it would depend on whether the Bark Bar leases or buys its next location. She also declined to divulge how much it cost to open the first Bark Bar. 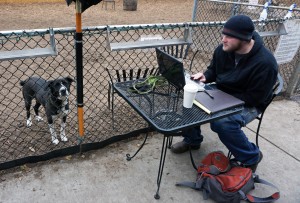 A patron and his dog visit Bark Bar.

But Peters hopes some of the company’s startup costs are still stashed in the 38th Avenue building. She bought the property for $450,000 in 2013 and then renovated it. She has it listed for sale at $700,000.

Local real estate broker Mike Carnes is marketing the property and said he hopes to have a contract soon.

“We are in discussions with a bar user in the Arapahoe Square-RiNo area,” Carnes said last week. “But we have not finalized a deal yet.”

Peters said proceeds from the sale will help pay down the company’s debts, including a small business loan backed by the Bark Bar real estate.

Bark Bar isn’t the only Denver business that has tried drawing in beer lovers by throwing a bone to their pets in recent years. The Watering Bowl, another bar with its own fenced-in dog park, has been up and running on Leetsdale Drive since 2013.

Peters, who owns three dogs of her own, said it’s the dog park that draws customers in. Then they stick around for the beer.

“Watching dogs play is one of the best simple joys in life,” she said. “People feel that kind of simple joy and now they get to do it in the comfort of their peers, enjoying their favorite craft beer.”

Still, Peters said there’s plenty of room for improvement on her Bark Bar business model. And she wants fix some mistakes she said she made on 38th Avenue bar.

The Bark Bar’s business will always be seasonal, Peters said. But while dogs don’t mind romping around in the snow and mud, the humans paying the tab would rather not suffer rain and sub-freezing temperatures.

Peters also said she’s looking into charging a membership or some sort of small upfront cover charge at the Bark Bar, reasoning that the business will have to pay rent on a fenced-in dog yard that isn’t bringing in cash on its own.

“In a restaurant setting, square footage is everything,” she said. “We’re still paying the same price per square foot for that area as we are for the bar and restaurant area.”

Peters said she’s also had several meetings with Jefferson County administrators to ensure that she doesn’t pump more money into a second bar only to be shut down again.

While the Bark Bar is moving out of Denver for now, Peters said she may consider coming back into the city for another location down the road. But she said she might look for a more industrial part of town where noise from barking dogs won’t be an issue.

“I am hopeful that at some point we’ll circle back and open an additional location in Denver, but I’m not waiting on it for our next location,” she said.

Catherine Peters of the Bark Bar is hoping to open a new location. Photo by Burl Rolett.

In the doghouse with the county for zoning violations, a bar and dog park is working to repay legal fees and open a new location outside of Denver.