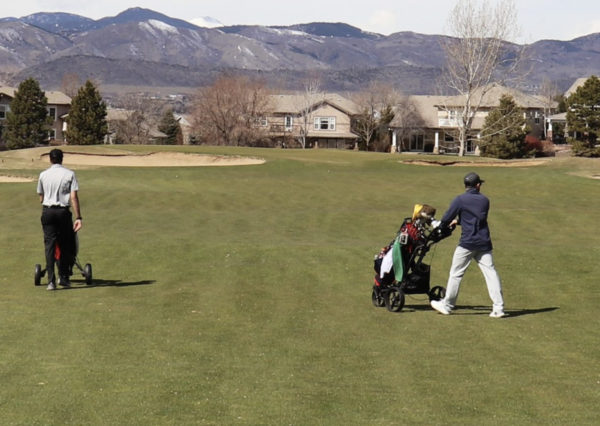 As pushcarts grow in popularity among golfers, push may be coming to shove for Denver-area country clubs that have long banned the caddies on wheels.

Ed Mate, executive director and CEO of the Colorado Golf Association, said he heard of pushcarts sales spikes of around 300 percent earlier this year, as some country clubs disallowed golf carts due to the pandemic.

“They’ve been slowly but surely increasing,” Mate said. “This year, it’s off the charts. You cannot find them; they are on backorder. You just can’t get them.”

Pushcarts have been around since at least the 1970s, Mate said, adding that they’re common in Scotland — golf’s birthplace. Some traditionalists don’t like the way pushcarts look. But for many golfers, they’re an economical alternative to caddies, Mate said, adding he believes the two can co-exist peacefully.

The interest is far from confined to older golfers. Mate estimated pushcarts were used by about three-quarters of competitors in the Colorado Golf Association Amateur Championship from July 30 to Aug. 2. Ten years ago, he said, there may have been one pushcart used.

But many Denver-area country clubs are unconvinced or unwilling to make the switch, as Mate listed nine that are reluctant to allow pushcarts on courses.

Colorado Golf Club at 8000 Preservation Trail in Parker has eschewed pushcarts in favor of its caddie program and walking since it opened in 2007. It has no plans to change, even as other clubs reconsider their pushcart policies.

“We believe it’s important to maintain a strong caddy program,” said Tom Ferrell, the club’s membership and marketing director. “The pushcarts are something we don’t feel is consistent with the mission of the club at this time.”

The same goes for Cherry Hills Country Club at 4125 S. University Blvd. in Cherry Hills Village, a golf shop representative said, adding that the club encourages its caddie program instead.

“At the beginning, when we reopened after COVID, we did allow them for a while, but they weren’t very popular,” said John Ogden, head golf professional.

“We currently allow (pushcarts),” said Bryan Heim, head golf professional at Columbine. “It is desired from some of the members here, and it also helps the golf course as far as the turf goes.”

Lakewood Country Club at 6800 W. 10th Ave. in Lakewood hasn’t had pushcarts since its inception in 1908, but that may soon change, as the club board plans to vote on whether or not to allow them.

“This is a member-run country club, and so I’ll do whatever the members want as the head professional here,” said Ben Honaman, Lakewood’s head golf professional.

Honaman added that the club’s caddie program could be hindered by pushcarts, but he can’t say for sure because Lakewood has never allowed them.

Sales spiked earlier this year when some country clubs disallowed golf carts due to the pandemic.