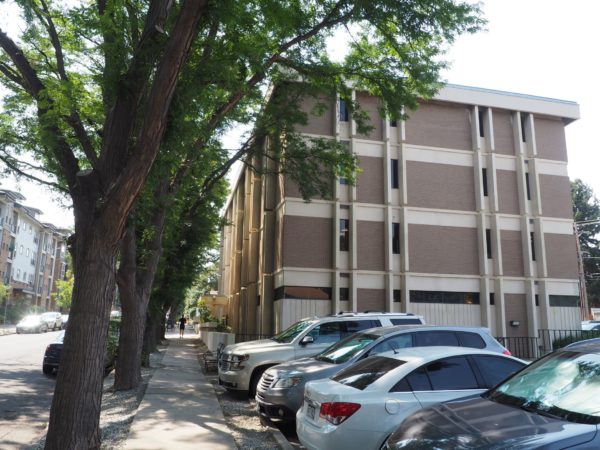 The four-story office building at 1633 Fillmore St. is among the structures the proposed project would replace. (Photos by Thomas Gounley)

California-based The Picerne Group has an affinity for City Park.

The company, which developed apartment complex Venue on 16th at 2900 E. 16th Ave., submitted an early-stage development proposal for a second multifamily project in the neighborhood earlier this month.

The plans, drawn up by Denver’s Davis Partnership Architects, call for a five-story complex that would span the entire west side of the 1600 block of North Fillmore Street, kitty-corner from the Venue complex. The site is already zoned for that height.

The plans do not directly state how many units are planned, but a floorplan shows 36 units on a single level. Some of the planned parking would be underground. 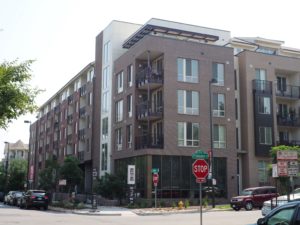 The Picerne Group did not respond to a request for comment. The firm’s website says it specializes in apartment development “in areas that are supply constrained and have growing employment.”

The half block along Fillmore is currently home to two duplexes, a two-story apartment building, a pair of two-story homes that appear to have been converted to apartments and a four-story office building that records indicate dates to 1966. There is also a sizable parking lot surrounding the office building.

All the parcels that make up the site are owned by entities that list their address as a P.O. box in Littleton, and their registered agent as Thomas Kobayashi. Kobayashi did not respond to a request for comment.

Picerne’s Venue on 16th, which has about 180 units, was completed about five years ago.

The four-story office building at 1633 Fillmore St. is among the structures the proposed project would replace. (Photos by Thomas Gounley)

The California-based Picerne Group’s proposal calls for a five-story complex that would span the entire west side of the 1600 block of North Fillmore Street.