If you haven’t gone to the inaugural Quiznos in the 39 years it’s been open, you might not want to wait.

A spokeswoman for the Denver-based chain of sandwich shops said in a Wednesday email that “amid local market expansion and associated rising costs, the economics of operating our Grant Street location has become unsustainable.”

“Because of this, the franchisee has decided to explore all available options,” the spokeswoman said. “This location, which has served local patrons for decades, remains open for the time being, along with about 15 other Quiznos restaurants in the Denver area.”

The restaurant on the corner lot at 1275 Grant St. in Denver was Quiznos’ first, opening in 1981. Signage at the site notes the distinction. 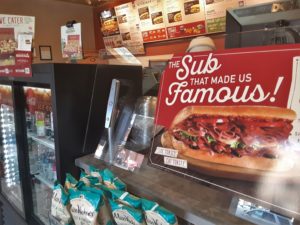 The chain is known for its toasted subs.

BusinessDen reached out to Quiznos after noticing that the building was being marketed for lease on LoopNet. The website indicates the listing was posted at the end of January.

Blake Kahlich of Prime Management, one of the brokers marketing the space, said he had been told the listing might attract media attention.

“They may renew,” he said. “They may not. It’s basically to protect the landlord.”

The 1,500-square-foot building is owned by an entity affiliated with Denver-based Sidford Capital, according to public records. Prime Management is a subsidiary of Sidford.

Quiznos said the restaurant’s lease is set to expire at the end of April. The franchisee that operates the location also owns other Quiznos locations in the Denver area, the company said.

Quiznos’ footprint is a fraction of what it once was. The company began franchising shortly after its launch, and founder Jimmy Lambatos sold it within 10 years. Quiznos peaked at about 5,000 locations in 2008, according to The Wall Street Journal. In 2014, it filed for bankruptcy, emerging about four months later.

In June 2018, Quiznos was purchased by High Bluff Capital Partners, a California-based private equity firm. By that time, the company was down to about 800 locations, with many of those outside the United States, according to media reports.

The company said Wednesday that it has 409 locations in the U.S. and Canada, and approximately 200 elsewhere globally. Franchisees own more than 99 percent of locations.

Meh. Quiznos is not as good as it used to be, and now there are so many more choices.