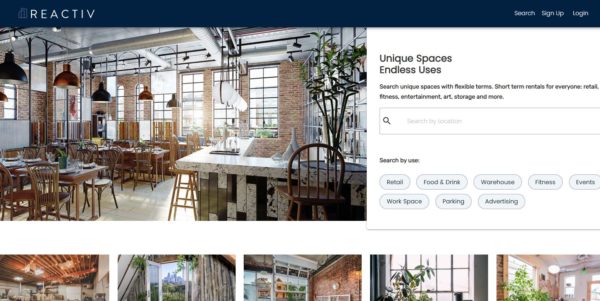 A pair of local real estate execs looking to further bring the sharing economy to commercial real estate have renamed their startup, and hope to expand from Denver to other cities.

This week, after a “couple dozen” bookings, the pair relaunched the company as Reactiv.

“Commercial real estate is changing really fast, and we need to be reactive,” Shepherd said of the name.

Reactiv operates similar to Airbnb. But instead of renting homes by night, the website allows users to list and rent a variety of spaces for varying lengths, from garages by day to entire coffee shops after regular business hours.

Atlas is a varied real estate firm. Among other things, the company has its own investment properties, offers property management services and has agents that represent Zillow Offers when it buys and sells homes locally.

Shepherd said venUse-turned-Reactiv started when he and Boykin realized “our commercial portfolio had a lot of downtime and wasn’t as optimized” as its residential offerings.

“We created Reactiv to actually service our own commercial portfolio,” he said, adding the two companies operate separately.

As of Wednesday, Reactiv’s website had 47 listings, all in Denver. Users could rent a 3,000-square-foot space at Sunnyside’s Diebolt Brewing Co. for $400/day, Black Eye Coffee’s shop in LoHi for $150/day starting after its 6 p.m. closure or a garage in Congress Park for $2/day (Full description: “You can park a car inside.”).

Atlas’ own properties are also on there, including space within Forge970, which the company bought from Industry developer Jason Winkler in August.

Reactiv takes a 12 percent cut of the fee.

Shepherd said he expects three primary types of listings. First, there are rentals of space that isn’t utilized 24/7, like the coffee shop. Second, there are landlords who want to squeeze revenue out of a unit while it’s vacant. Third are business owners who want to attract users that could provide complementary services.

While tenants typically find commercial real estate with the help of a broker, Shepherd said he sees Reactiv as “a huge additive from a broker perspective.”

If landlords list space on Reactiv while they hunt for a long-term tenant, he said, the listing essentially acts as advertising, and a short-term user could become a more traditional tenant down the road.

“I draw a parallel to how open houses work for residential real estate,” he said.

While bookings were fairly minimal while the company operated as venUse, Shepherd said that period was intended to be test with a minimum viable product.

He hopes to have Reactiv up and running in a few other cities in a year. Phoenix would be a natural fit, he noted, given that Atlas also operates there.