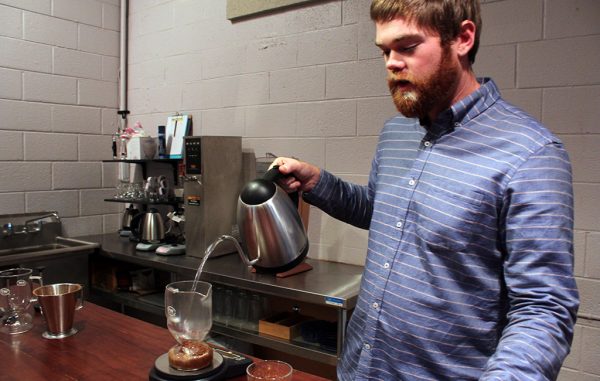 A local coffee guru is looking to make one of the industry’s more difficult tasting methods an everyday option.

For the last 11 years, Colorado Springs native Josh Taves has been working in the coffee industry, starting as a barista and moving up to his current gig as the director of quality control and business development at Novo. Now he can add one more item to his coffee resume: inventor.

Earlier this month, Taves received a patent for his filterless Rattleware Cupping Brewer. The Rattleware allows users to brew grounds in hot water before they sink to the bottom of the 14-ounce device. It uses rod and stopper to seal the grounds off from the rest of the coffee, enabling people to pour and go.

But the innovation cycle for Taves has been a long one. He first came up with the idea for the Rattleware in 2010, but the patent process alone took three years for approval.

“It’s a lot of really intense hard work and then nothing for eight months,” he said. 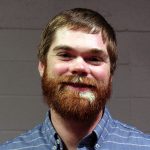 “It allows the coffee grounds to do what they want to do,” he said.

For the grounds to stop brewing during regular cupping, they have to settle on the bottom of the cup. Drinkers use a spoon to scoop the liquid off the top and slurp it to get the full flavor profile.

While cupping allows coffee lovers to try multiple roasts in one sitting that all have been brewed the same way, Taves said, it can be awkward for people new to the process. He said new brewing device removes some of those obstacles.

“It takes a lot of agreement just to be there,” Taves said. “(Rattleware is) a bigger volume, it takes away the awkwardness and it allows you to showcase cupping.”

Before selling the Rattleware publicly, Taves made a prototype in 2013 and presented it in a startup competition with Barista Nation. His winnings gave him seed money to apply for a patent and get the idea rolling.

He later launched the brewer on Kickstarter in March 2015. The campaign didn’t hit its goal, but the exposure led Taves to Seattle-based Espresso Supply, which agreed to sell his product.

It launched on the retailer’s website for $19 last October and is now available nationwide and in some of Espresso Supply’s international distribution spots. Novo Coffee also sells the brewer in some of its local coffee shops.

“The intention is for it to expand,” he said.

A local coffee guru is looking to make one of the industry’s more difficult tasting methods, called cupping, an everyday option.