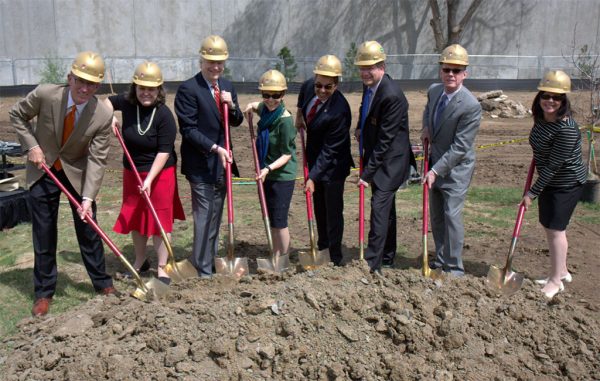 The university held a groundbreaking ceremony on May 8. (DU)

For the latest addition to its growing campus, the University of Denver is using a new tactic to accelerate the process.

The university opted for the design-build style of construction with a new administrative building, which will be completed in April. The building, at 2601 E. Colorado Ave., will cost $14.5 million.

James Rosner, vice chancellor of facilities management and planning, said the contractor and architect work under one contract in design-build projects. The contractor selects the architect and construction can start during the design process. The university is using PCL Construction Services Inc.

Hord Coplan Macht, a Baltimore-based firm with offices in Denver, was brought in as the architect for the project. The designer and contractor working together lowers the risk of changes and omissions, Rosner said.

“We didn’t have to stop once we finished the design to contract with the general contractor,” he said. “There shouldn’t be any surprises.”

Not having to stop after completing designs for the administration building saved the university six t0 eight weeks of construction time, Rosner said.

He added that once the building is complete, the university will compare costs between the building using design-build and other buildings on campus. 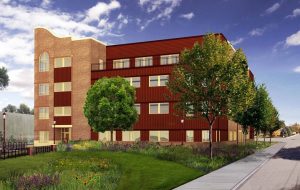 Rendering of the planned building, which will hold 180 to 200 administrative offices. (DU)

The exterior still will have stone and brickwork similar to the rest of DU’s buildings, Rosner said, and the rest of the building will be done in design-build style.

“This is DU’s first time to use the design-build method,” he said.

The project will house between 180 and 200 administrative offices for shared services. Rosner said the school wanted to embrace an open-floor office concept, with some enclosed offices and conference rooms, but the rest laid out with cubicles.

“The goal is to have that collaborative environment where people get to see each other and aren’t just holed away in their office, isolated,” Rosner said.

The building also will bring some offices back onto the main campus area. The office of advancement, which works with donors, currently is housed at 1165 S. Pennsylvania St.

“We’re looking for these employees that have been working off campus to come in and have a permanent space,” Rosner said.

The university previously owned the land on Colorado Avenue, which was used as green space and sits on 1.28 acres. DU will be self-funding the building.

The four-story structure will comprise 48,900 square feet near the South University Boulevard onramp for Interstate 25. Rosner said the school owns a parking lot near there and its proximity to the highway was ideal for commuting employees. 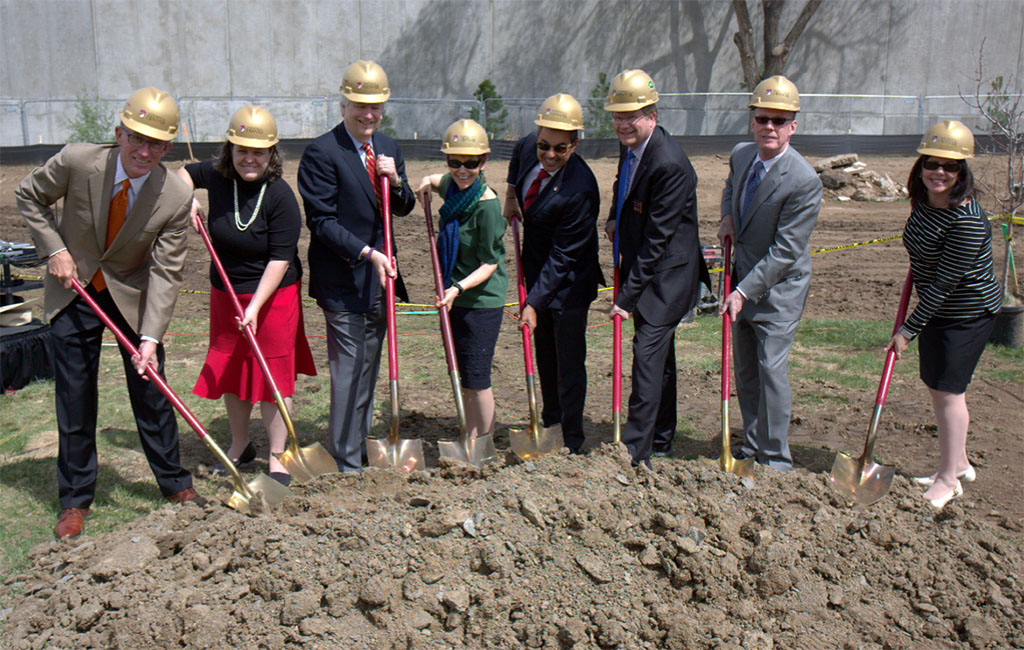 The university held a groundbreaking ceremony on May 8. (DU)

The university's new administrative building at 2601 E. Colorado Ave. will be completed in April and cost $14.5 million.