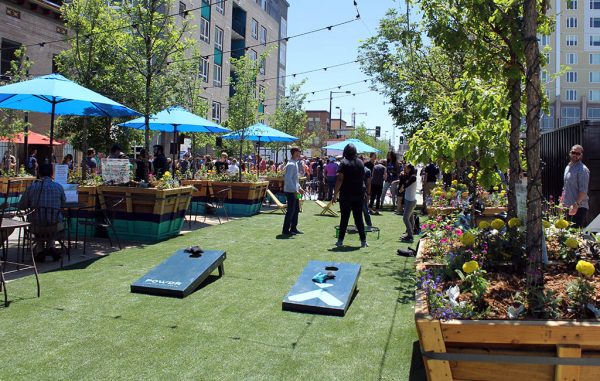 The temporary park is set up between Lawrence and Larimer streets. (Kailyn Lamb)

The city of Denver is out to prove that a park can be anywhere – even in the middle of a street.

The Square on 21st opened Thursday as a temporary park in the Ballpark neighborhood between Lawrence and Larimer streets. The entire block has been shut down for the summer to make way for a dog park, large tree and flower planters, spaces for food vendors, a pop-up retail spot and a stage.

Mark Dym, owner of Racca’s Pizzeria Napoletana restaurant on nearby Larimer, said this was his first time selling food at a park setting. He’s hoping to commit to being at The Square all summer if he can get the staff.

Another vendor at the park was brewing hot coffee inside a red-and-white Volkswagen Bug. Matthew Pendleton, owner of On the Road Coffee, said that he has no plans for a brick-and-mortar store, and that he prefers the simplicity of selling coffee from a small car.

The Downtown Denver Partnership Inc. worked with the city of Denver on the project. 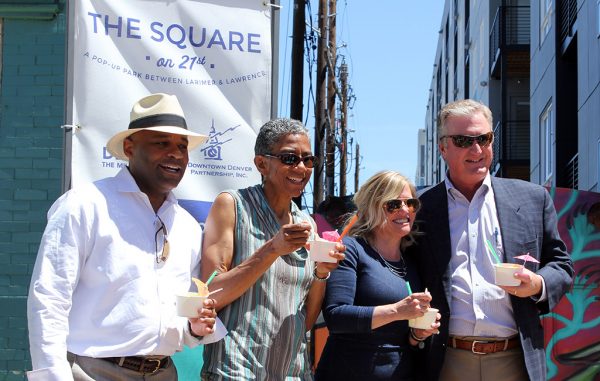 The temporary park is set up between Lawrence and Larimer streets. (Kailyn Lamb)

The city of Denver is out to prove that a park can be anywhere -- even in the middle of a street.