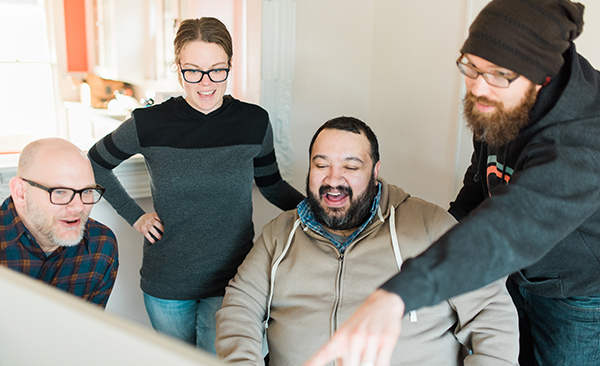 Clover Partners – whose services include writing copy, designing logos and making websites from offices in Denver and Oklahoma City – has moved to a space where employees won’t interrupt each other’s work when they videoconference out-of-state colleagues a couple times a day.

“We really needed a space that was divided like this,” said Jeremy Sanchez, partner and chief web architect, pointing to doors separating a conference room and kitchenette from the main room, where he and content strategist Brandi Koskie work at adjacent desks.

“We’ve had contractors work out of the old office before,” he said. “And they can’t be privy to every discussion.”

The 850-square-foot office, double the size of Clover’s previous post a few blocks north on Lincoln Street, also gives Clover Partners room to grow. The company plans to hire a web developer and an intern.

Sanchez and Koskie, both from Oklahoma City, opened shop last January with two partners based in that city. The company just hired a fifth full-timer this spring.

While about 50 percent of clients are from Oklahoma, the pair said starting up in two cities has attracted clients with a wider geographic reach, including Starwood Hotels and Resorts.

“It signals to people that we’re not just trying to work with local companies,” Sanchez said. “And we’re shocked how many people we’ve talked to, who are like, ‘Denver is our next move.’”

Nestled between Max’s Wine Bar and the garage for the restaurant Racine’s, Clover’s office recently was converted from storage space to an office. According to Denver property records, the Foothills Group purchased the property, which includes a retail strip wrapping the corner, for $2 million in August.

Clover Partners – whose services include…