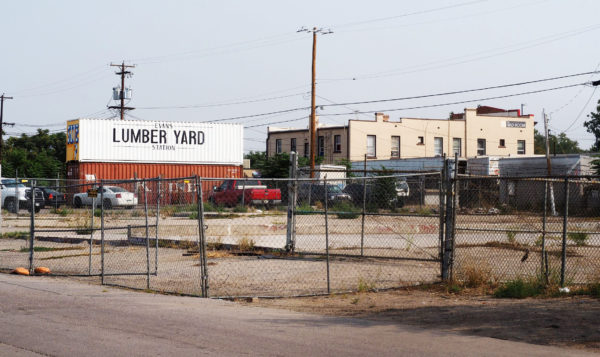 The land that sold is at the southeast corner of Acoma Street and Jewell Avenue. Photo by Thomas Gounley.

A development site in Denver’s Overland neighborhood has sold for more than five times what it fetched five years ago.

Newmark Knight Frank said the lot, which has no structures on it, is about 0.57 acres, making the deal worth $120 per square foot. Chris Cowan and Mackenzie Walker with the firm represented the seller.

The property was sold by SoBo Real Estate; John C. Cook Jr. signed paperwork on behalf of the seller. A related entity purchased the property in August 2015 for just shy of $600,000, and property records indicate that deal involved slightly more land than what sold to Palisade.

Palisade founder and President Paul Books said in an email that the company hasn’t finalized its development plans, but the project will be multifamily. Earlier this year, Palisade submitted a proposal to the city for a nine-story, 165-unit project, although a city spokeswoman said those plans need to be resubmitted to reflect feedback given by city staff.

Other local apartment complexes that Palisade has developed include The Wheatley and The Lydian along Welton Street in Five Points. The firm is also involved with the redevelopment of the Rossonian Hotel.

Palisade’s general plans fit with the trend in Overland in recent years. The neighborhood has largely been shifting from more industrial to residential use. A block away, condo building SoBo 58 is under construction.

A location of Primrose Schools, which serves infants through toddlers, is planned for the lot immediately south of Palisade’s buy, according to signage at that site.

The land that sold is at the southeast corner of Acoma Street and Jewell Avenue. Photo by Thomas Gounley.

Denver-based Palisade Partners, which paid $3 million for 0.57 acres that sold for $600,000 a half-decade ago, is planning to build multifamily housing.