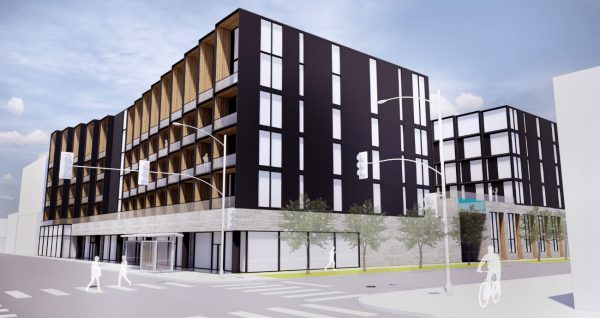 A rendering of the proposed five-story apartment complex, seen from the corner of Santa Fe Drive and 10th Avenue. (Public Records)

Washington-based Holland Partner Group, which according to its website owns 14 apartment complexes in the Denver area, last week submitted an early-stage development proposal to the city for a 203-unit project along the corridor in Lincoln Park.

The project would consist of two five-story buildings on the southern end of the 1000 blocks of Santa Fe Drive and Inca Street. 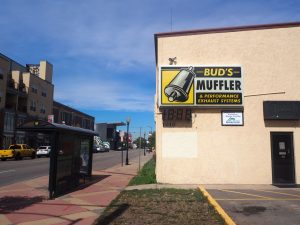 On the Santa Fe side, the proposed complex would replace auto shop Bud’s Muffler, which closed this year. On the Inca side, it would replace a fourplex and an industrial building.

Holland doesn’t own the site. A representative for the company declined to comment.

The plans submitted to the city, known as a “project concept”, indicate that the western building along Santa Fe would have 83 apartments as well as some ground-floor retail space. The longer eastern building would have 120 units.

Holland isn’t the only company looking to bring more residents to Santa Fe Drive. A developer has broken ground on an eight-story residential project in the 1200 block, and a site has been scraped in preparation for a five-story condo project in the 600 block. Further south, closer to Alameda Avenue, Westside Investment Partners has said it envisions building apartments at the site of a warehouse formerly used by Sports Authority.

Other recent changes along Santa Fe Drive include the closure of Interstate Kitchen & Bar and the openings of restaurants Rocky Yama Sushi and Pistol Whip, the latter of which is already for sale.

A rendering of the proposed five-story apartment complex, seen from the corner of Santa Fe Drive and 10th Avenue. (Public Records)

The structures it would replace include a former muffler shop. Holland is currently building projects along South Broadway and Speer.