Flywheel Capital owns both sides of the 2100 block of South Cherry Street in Denver. (Thomas Gounley)

The first plans are in for a large site assembled by a single developer at the I-25/Evans Avenue interchange.

Flywheel Capital owns the full city block bounded by Evans and Warren avenues, and Clermont and Cherry streets, as well as the triangular block along I-25 to the east. The company paid $13.5 million for the bulk of the site last October, then filled in the gaps with $600,000 and $1.15 million purchases in January and April, respectively.

In all, according to a site-development plan submitted to the city last month, Flywheel would control about 5.8 acres if the city agrees to vacate the 2100 block of South Cherry Street, which divides Flywheel’s holdings.

The plans show that Flywheel wants to build a five-story apartment complex on the southern portion of the site. It would have 361 apartments, 36 of which would be income-restricted. The project would have a total of 392 parking spaces.

Ben Hrouda, managing partner at Flywheel Capital, declined to comment on the plans.

The proposed apartment complex would take up about two-thirds of the site that Flywheel owns. The plans show the company wants to put a half-acre “pocket park” just north of it. That would leave 1.27 acres for additional development at the southeast corner of Evans Avenue and Clermont Street.

Elsewhere in town, Flywheel is finishing the conversion of a former assisted living facility at 4550 W. Colfax Ave. into a condominium building, with studios starting at $175,000. The company also has proposed building on a five-story project on the parking lot across the street. 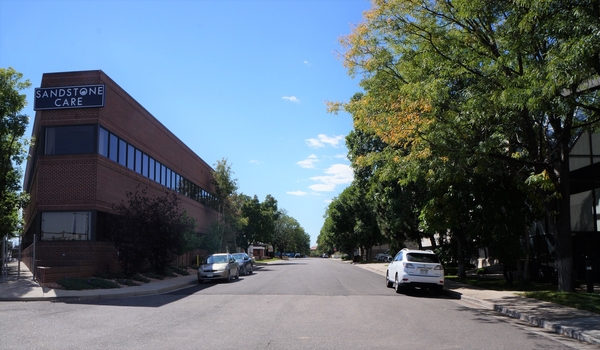 Flywheel Capital owns both sides of the 2100 block of South Cherry Street in Denver. (Thomas Gounley)

The first plans are in for a large site assembled in the past year by a single developer.