A massive land deal has gone down in RiNo.

Carmel Partners, a San Francisco-based apartment developer, paid a combined $36.2 million last week for the parking lots at 3800 and 3900 N Brighton Blvd., according to county records.

The parking lots were sold by Pepsi, which has a bottling facility across the street from them. Combined, they are 3.77 acres, separated by 39th St. The deal works out to $220 a square foot. 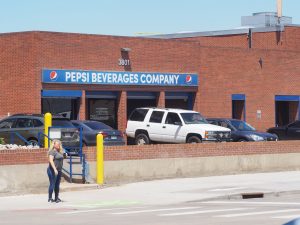 The lots are across the street from the Pepsi bottling facility.

BusinessDen reported last month that Carmel was under contract to purchase the site.

The lots are within walking distance of the 38th and Blake commuter rail station, an area poised for intense redevelopment in the coming years. They have incentive zoning that allows up to 16 stories.

Carmel Partners did not respond to a request for comment. City records show an executive with the company submitted an early-stage development proposal to the city earlier this year, proposing a seven-story project on both lots, with more than 600 apartments and about 40,000 square feet of retail space in total.

The last land deal in Denver’s core comparable in both lot size and purchase price also involved Carmel. The company paid $30 million in February 2018 for a site in the 3300 block of Brighton Boulevard; development there has yet to begin.

A short distance from the site, developer Hines and Cresset Capital Management recently paid $21 million for an approximately 2.5-acre site next to the soon-to-open Mission Ballroom concert venue. The companies plan to build a 10-story, 392-unit apartment complex.

The last land deal in Denver’s core comparable in both lot size and purchase price involved the same buyer.