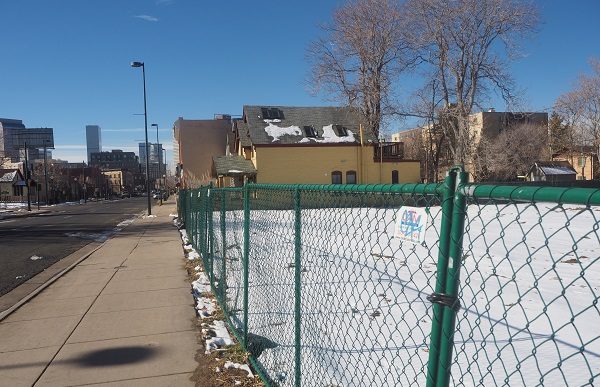 A half-acre site in the 2800 block of Welton Street in Five Points sold for $2.4 million. (Thomas Gounley)

A half-acre site along Welton Street in Five Points has sold.

The single-family homes and one-story retail buildings that previously were at the site have been demolished. The parcels add up to 0.51 acres, making the deal worth $106.55 a square foot.

The members of the LLC that purchased the property are Patrick Guinness, of Guinness Development, and Oliver Guinness, according to documents associated with the sale.

Patrick Guinness said in an email that the pair and a development partner, whom he declined to disclose, are planning a residential project. He said it was undetermined whether the units would be for rent or for sale.

According to a LoopNet listing, the parcels are zoned C-MX-5, which allows for up to five stories.

Welton Property Investments LLC sold the parcels. The manager of the LLC, Michael Markel, purchased the parcels between August and October 2013 for a combined $1.22 million.

A half-acre site in the 2800 block of Welton Street in Five Points sold for $2.4 million. (Thomas Gounley)