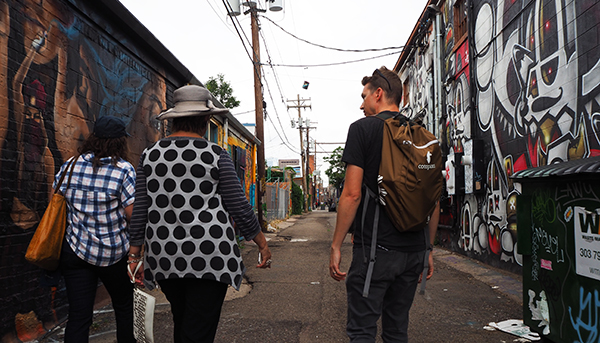 James Carlson leads a tour group through the alley between Larimer and Walnut Street.

There’s more art in Denver than the exhibits at the city’s museums.

James Carlson and Erin Spradlin started doing the Denver Graffiti Tour in May — a two-hour, 5,000-step walk through RiNo on Saturdays and Sundays. For $25 a ticket, the tour bounces between a few dozen of the rich murals jammed into a neighborhood in transition.

Both Carlson and Spradlin do tours. (“We fight over who has the better tour,” Carlson said. “Erin is quicker and more efficient than me.”) The conversation is as much about the art and artists behind it as it is about the dynamics of municipal change.

“The art is interesting to look at and talk about, and the pieces all have their own stories,” Spradlin said. “But really, the tour is a great way to experience a neighborhood and understand the politics of this city.”

The art varies wildly, from repeating eye designs of the artist Ahol Sniffs Glue on the IMAC building to the photorealistic freehand drawings by the Denver-based Gamma. While some of the street murals have been around for years, others will be painted over in September, when the CRUSH art festival partners with the RiNo Arts District to paint over 100 new murals across 10 city blocks in one week.

Real estate brokers by day, Carlson and Spradlin spent 1 ½ months tracking down the people behind RiNo murals before starting the tour, usually through Instagram direct messages. Once they connected, the pair would interview artists about their work and life story, though subjects usually were hesitant to say what, exactly, their art “meant.”

Dana Kogan, a family nurse practitioner from Chicago, had arrived in Denver at 7:30 a.m. on the day she toured RiNo’s street art. In town for a conference, she said she found the tour after Googling “cool things in Denver,” followed by “street art tour.”

Kogan said Carlson did a “fairly nuanced job of talking about a community that is changing pretty rapidly.”

“I got the sense that he’s following these people and is engaging with them,” she said. “He’s not just reading a script that someone prepared for him. He’s a participant himself.” 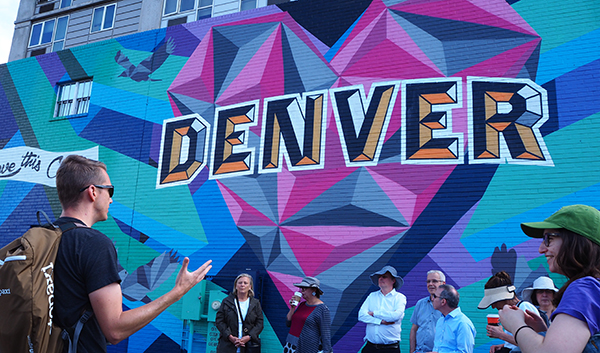 James Carlson leads a tour group through the alley between Larimer and Walnut Street.

They talk about the art and artists as well as the dynamics of municipal change.