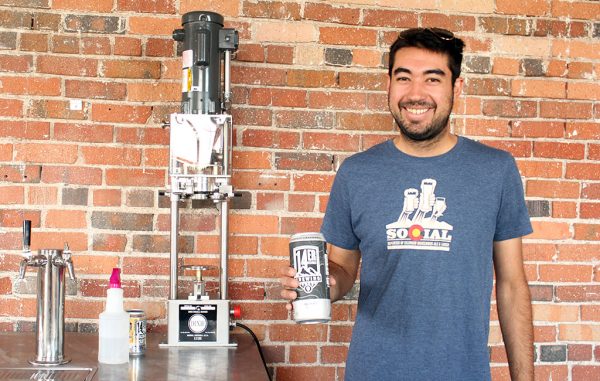 Andrew Kaczmarek with a 32-ounce crowler inside the 28th Street building. (Kaitlyn Lamb)

Upstart 14er Brewing Co. signed a 10-year lease on a 3,000-square-foot building on the corner of 28th and Walnut streets – an easy can toss away from half a dozen other breweries.

“We started looking here in RiNo because it really is brewery mecca,” co-founder Andrew Kaczmarek said. “There’s a lot of innovation happening here.”

14er launched last year, farming out the brewing part to Crazy Mountain Brewing Co., and selling to around 100 liquor stores and bars.

The brewery will feature a tasting room and bar in the front where customers can grab a 14er beer in a 32-ounce crowler – a can version of a growler.

The company is hoping to add a patio and parallel parking spaces around the building. The inside also will need some work. One of the walls will be knocked down leading into the brewing space, which will take up around 1,000 square feet. The space will have 10 barrels, and 14er will can all its product there.

Kaczmarek said the company would start building once it receives permits from the city. He hopes to open in early 2018. Part of the wait was due to rezoning the building, he said.

14er will get in on the RiNo action just as the big boys of brewing try their hand in the fast-developing neighborhood. New Belgium Brewing and Odell Brewing are coming, and Blue Moon recently opened.

“All of our beers are in six packs right now, they’re aggressive flavor profiles but they’re not over the top on ABV,” Kaczmarek said.

Selling beer to bars and liquor stores is a full-time job, and Kaczmarek said it will take some adjusting to get the brewery side of the business ready. The company plans to hire staff for production and customer service.

“We went with the contract model and put beer in cans first, kind of doing it the opposite of what most people do. I think we were kind of surprised by our initial success with that,” he said.

Andrew Kaczmarek with a 32-ounce crowler inside the 28th Street building. (Kaitlyn Lamb)