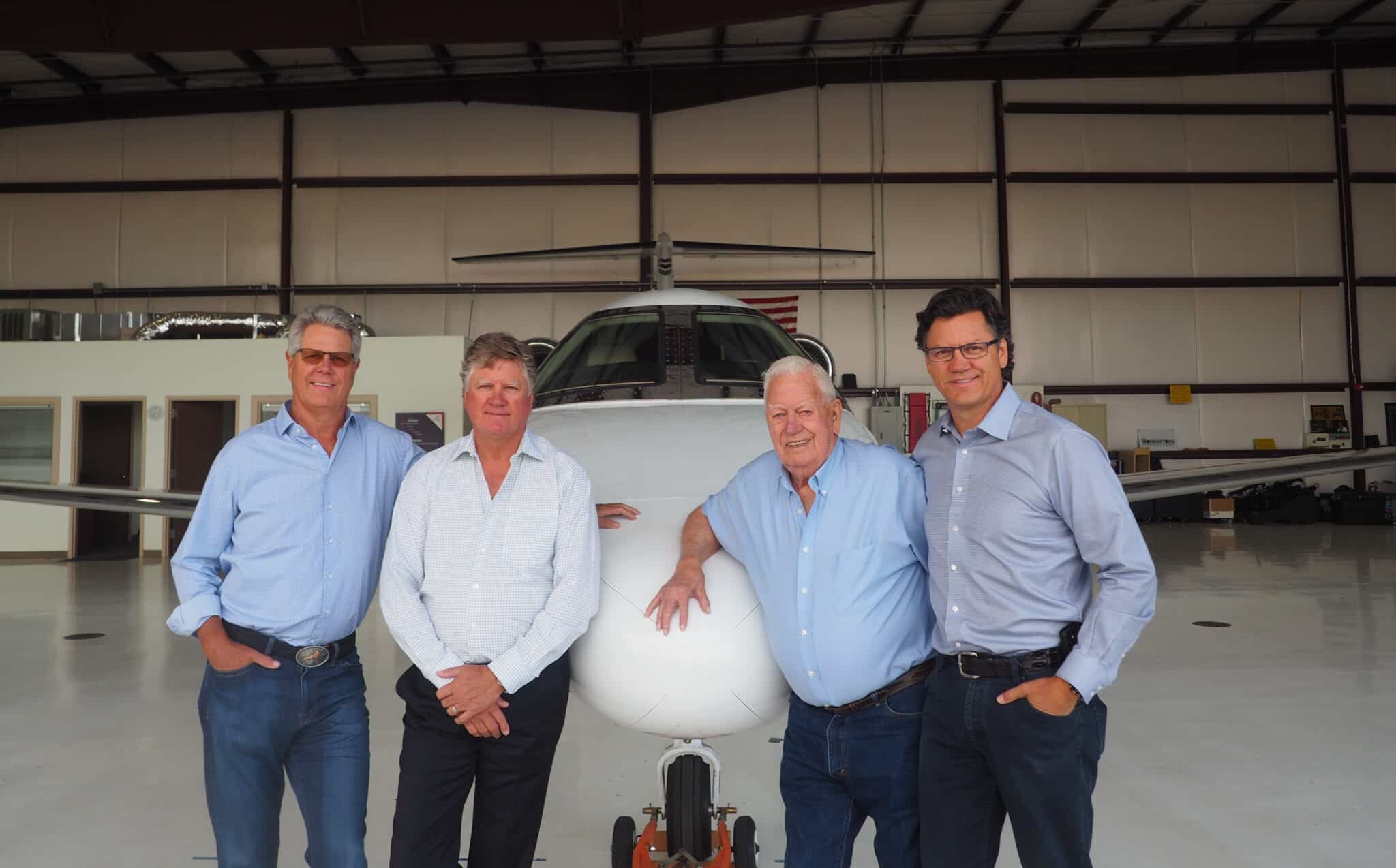 The Haselden family packed into a Cessna 182 plane for vacations in the summer like most families in the 1970s would hop in a station wagon.

One summer, the family of five spent two days flying from Denver to Marathon, Florida, for a fishing trip, stopping by at least three airports along the way to refuel and rest.

“That’s a long way to go in a small plane, but it was like our family truckster,” said Byron Haselden, the youngest of the family’s three sons and CEO of Haselden Construction.

Flying started as a hobby for the Haselden family. But it soon became an integral part of Haselden Construction, which launched almost 50 years ago and is on track for $400 million in annual revenue.

The Haseldens now have an eight-seater jet and a 7,200-square-foot private hangar at Centennial Airport. Jim Haselden was the first to get his pilot’s license in 1972. Then came sons Ed, Mike, Byron and even their mother, Millie.

The family has upgraded their trips to Florida, and the larger jet means they don’t have to stop along the way as much anymore.

The love of flying has turned into an advantage in the construction industry.

“It would be very hard to do some of the projects that we’ve done over the years in mountain towns and communities because the ability to get to some of those places in a two-hour timeframe just didn’t exist with commercial air travel, and you certainly couldn’t get there if you drove,” said Ed Haselden, the oldest son and CEO of Haselden Construction from 1991 to 2015.

“Private aircraft travel really became one of the ways in which we serviced projects within a two-hour geographic radius from Denver.”

Getting off the ground

Jim Haselden, 92, started Haselden Construction with his former business partner Bud Langley in 1973. The business was originally named Haselden-Langley Constructors. Before they started the business, while working for a different general contractor, they would use Langley’s plane to fly to bid openings out of town.

“That’s where my dad caught the flying bug,” Ed said. 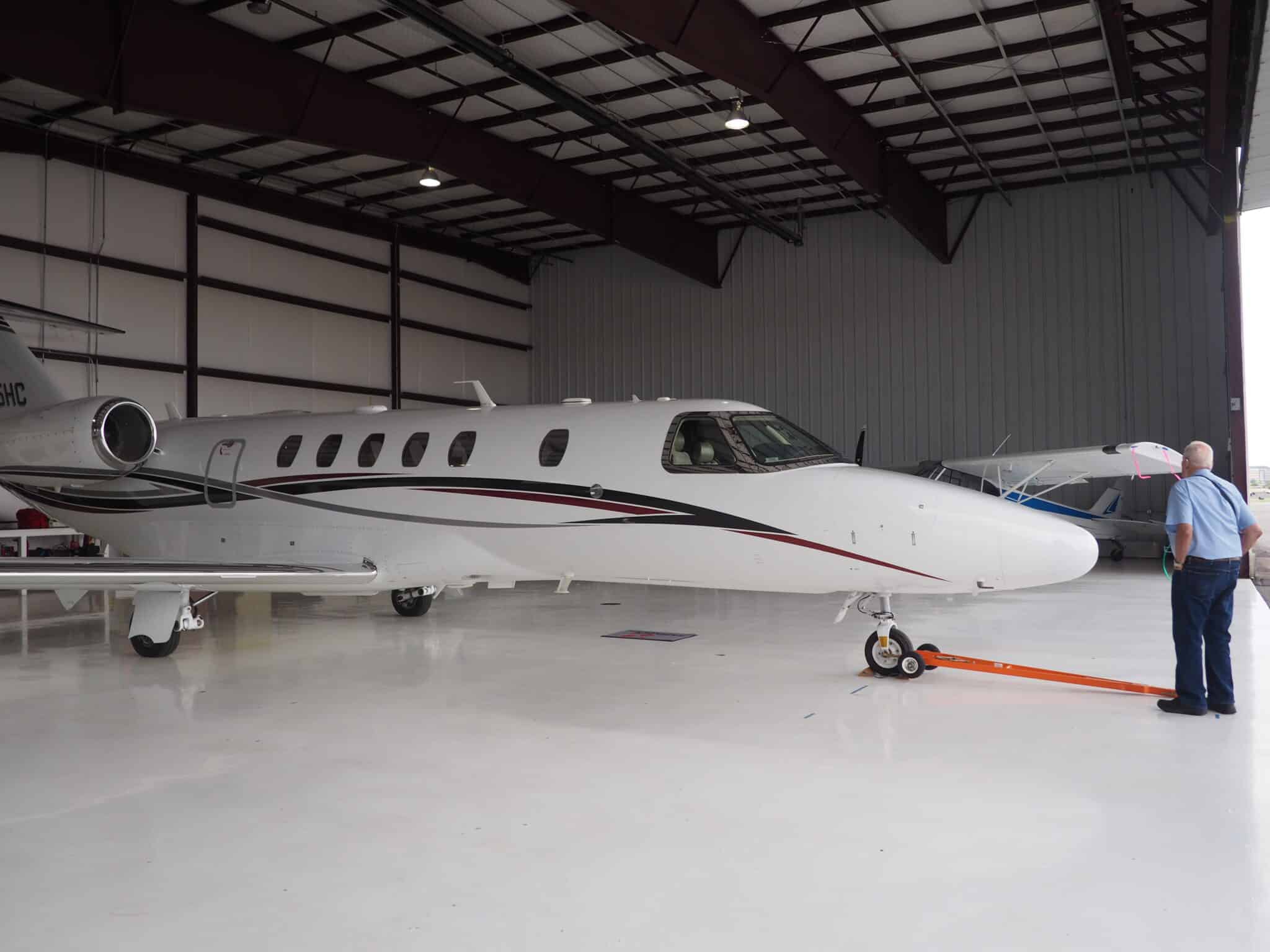 Jim Haselden, now 92, had to give up flying at 80 years old due to insurance policies.

Jim Haselden was an airman gunner in the Air Force during the Korean War. He had been on B29 and B26 planes for reconnaissance missions, but never flown them himself. In 1972, a year before the business began, Jim got his pilot’s license at Centennial Airport.

Ed, now 65, followed shortly after and got his pilot’s license in 1976 through Centennial Airport’s flight school, learning to fly at 19 years old in a Cessna 172.

“I was up there almost every week, so it made the most sense to save some time and take our single-engine Cessna up there,” Ed said.

Back then, Ed would fly the small plane at an altitude of around 14,000 feet, using visual flight rules over peaks like Mt. Sopris near Aspen and passes like Corona and Mosquito.

Mike, now 61, got his pilot’s license in early 1980, and Byron, now 53, got his when he was 27 years old in 1996. Byron and Mike only learned how to fly smaller propeller airplanes, but Ed has his commercial pilot’s license and is able to fly the company’s jet.

“My mother also decided to take what at the time was called a pinch hitter’s course in case anything ever happened to my father when he was flying, and she could land the airplane,” Ed said. “Instead of just graduating from the pinch hitter’s course, she went ahead and got her pilot’s license. But she never really flew much.”

“Not because he couldn’t fly anymore, but because he wasn’t flying enough,” Ed said. “The insurance company told him he either had to be more proficient or hang it up.”

In the late 1980s, when Denver was getting out of a recession, Haselden Construction followed some of its customers into the mountains of Colorado and into adjacent states.

One of those customers was Humana Hospital. In the late 1980s and early ’90s, Haselden Construction had roughly five or six hospitals under construction, most of them large remodels in states like Arizona, Utah and California. 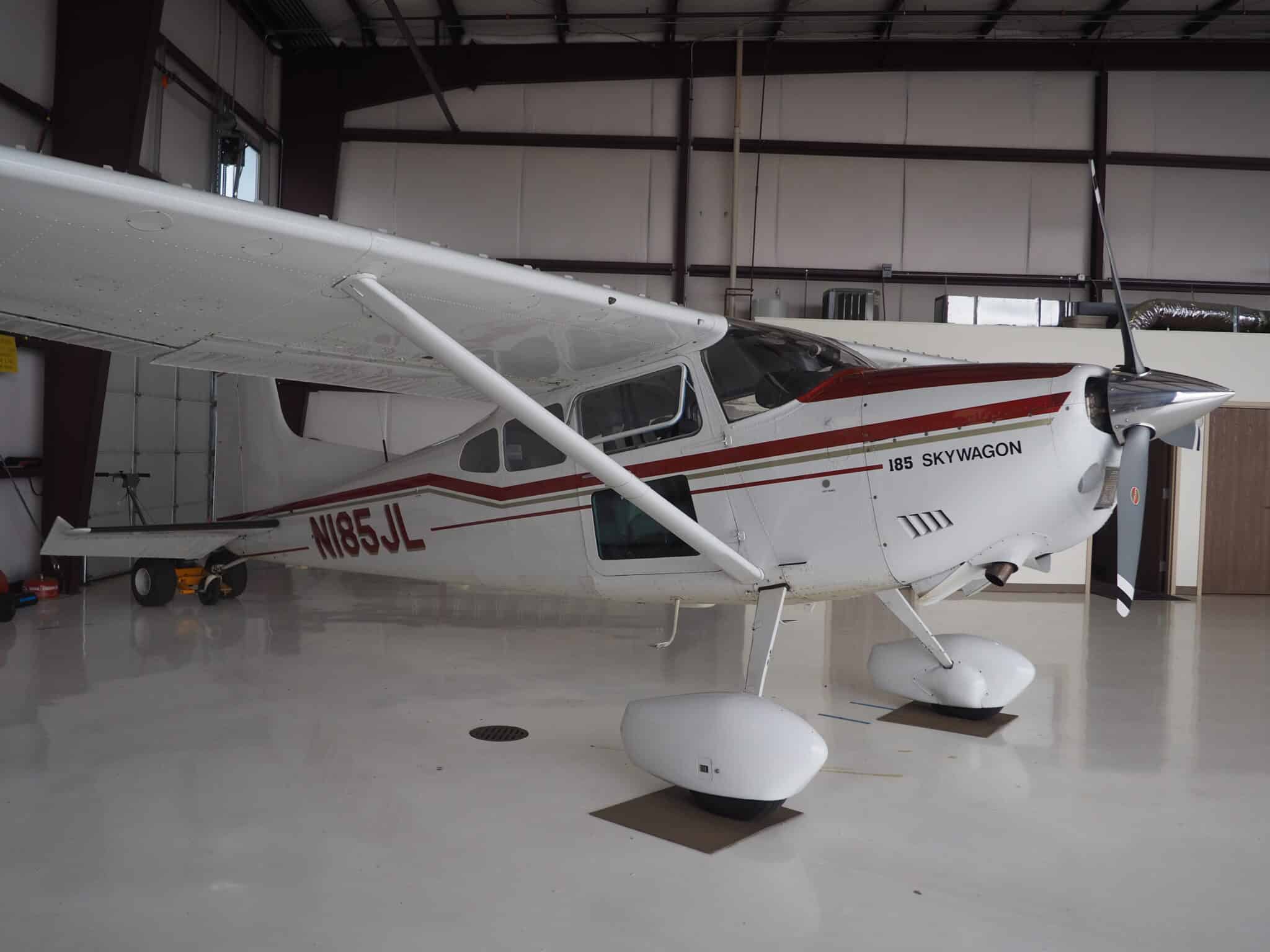 The Haselden family would pack into a plane, similar to this Cessna 185 Skywagon, for summer vacations.

“We developed an idea to put at least one tested Haselden employee on the project, either as the superintendent or project manager, and if we could be at a job site within two hours of time travel, we could really administer that project no matter whether that project was here, in the mountains of Colorado or someplace two hours away,” Ed said.

The Haseldens park their Cessna Citation CJ4 at Centennial Airport. Ed said it flies 50 percent for business and the other half for personal use.

Ed said he flies around three times a month to maintain his license, but brings a full-time licensed pilot along with him for safety reasons.

He spent 10 years working his way up to a commercial pilot’s license, and has only had one emergency incident. He had to make an emergency descent in St. Louis while on the way to Denver from Kentucky due to decreasing cabin pressure.

“I didn’t have time to think before my flight training kicked in,” Ed said.

The hangar also does double duty: it’s where Ed and his band, The Originators, practice. Ed plays guitar. The band has played at venues like Red Rocks and is planning to perform at Castle Pines for its concert in the park series in August.

Ed, who graduated from the University of Colorado Boulder in 1980, started working for the company as a project manager a year later and became CEO in 1991 when his father retired. Mike worked alongside him as chief operating officer from 1991 to 2015, and Byron became CEO that same year.

“The decision making process and the risk management while flying a jet aircraft at 43,000 feet have very close correlations to what you have to do as a CEO in business,” Ed said. “The ability to understand the macro situation, as well as the ability to compartmentalize and descend down and deal with any micro issue are important for both scenarios.”

There was never a doubt that he would work for his dad, Ed said. He grew up visiting construction sites on Saturday mornings with him.

“Construction and engineering were things that resonated with me, and fortunately they resonated with my brothers as well,” Ed said. “As a kid, I grew up building Legos, and I’ve watched my son growing up, building Legos and now my grandsons, and I think there is a builder’s gene in people that you can identify early on, and where that gene takes you, who knows.”

Today, Ed and Mike sit on Haselden Construction’s board of directors with Ed acting as chairman. The company’s headquarters are in Centennial, near the airport, and it also has an office in Glenwood Springs and Fort Collins. The company has 380 employees. 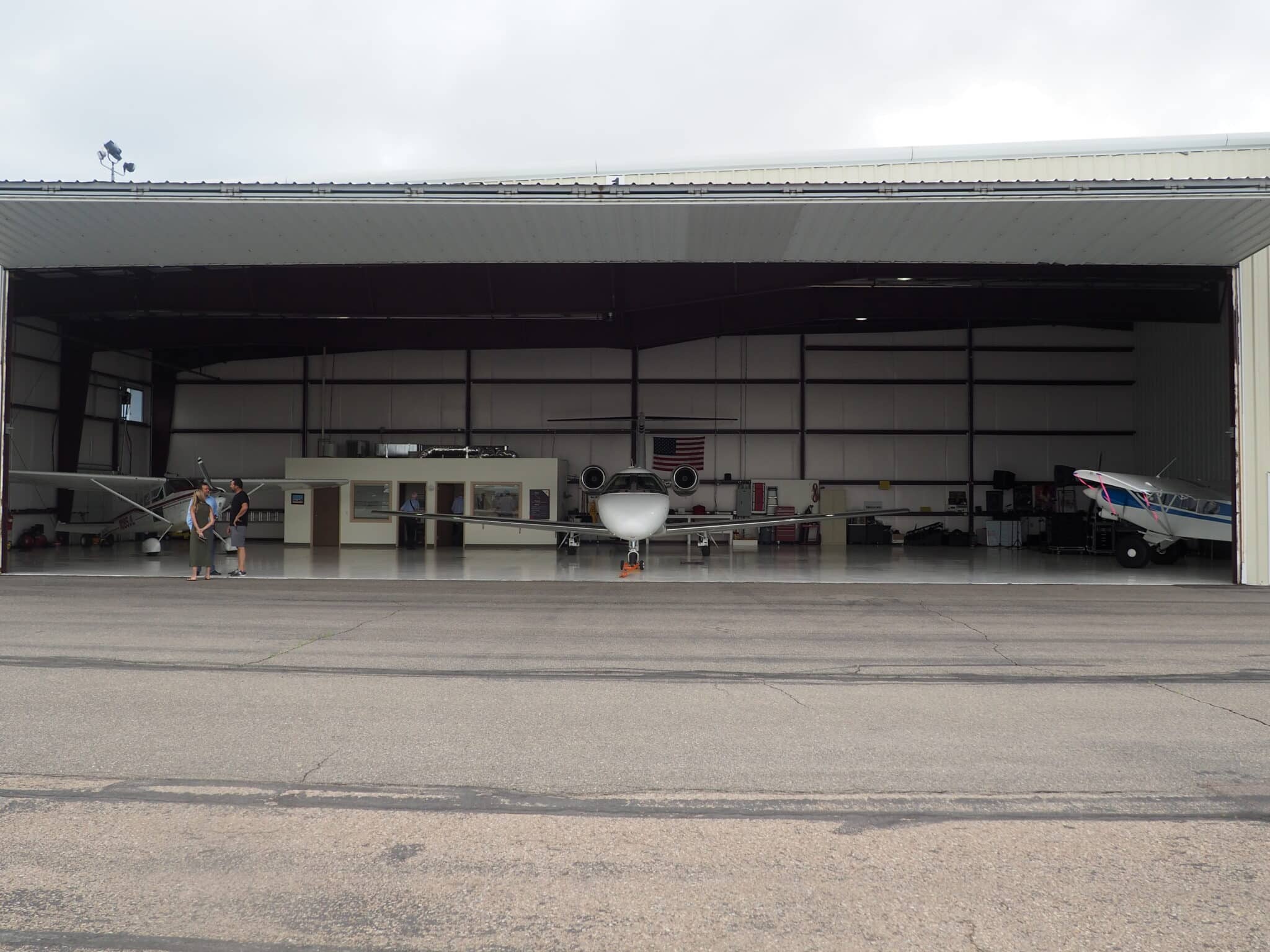 The Haselden family built their own Centennial Airport hangar in 1996.

“Mike and I ran the business for about 23 years, and we grew the company from about $12 million in revenue up to around $275 million,” Ed said. “Byron has taken it over and … right now they’re pushing $400 million on an annualized revenue basis.”

Haselden Construction focuses on large commercial and institutional construction projects, like schools, hotels and hospitals, and it’s also getting more involved in multi-family housing. Past projects include The Clayton Members Club & Hotel in Cherry Creek, UCHealth Longs Peak Hospital and a variety of Colorado State University and University of Colorado Boulder buildings.

The family-owned construction firm is getting ready to celebrate its 50th anniversary next year. Ed said the brothers are planning their next steps for succession, but haven’t chosen a new CEO.

“It’s a personal mission of mine is to assure the continuity for the next 50 years, and to assure that at the 100th birthday of this firm, it’s still a viable organization, and there’s the opportunity for it still to be run by a Haselden family member,” Ed said.

None of the brothers’ kids have learned how to fly the company plane yet. Ed said he’s happy to stay in the air until he’s told otherwise.

“I’ve been fortunate to enjoy both the construction business and flying at the same time, and I don’t think a person who enjoys flying can be any more fortunate than to be able to fly for their business,” Ed said. “The only thing that could be better is if you could do business, fly in the same day, play golf and play rock and roll music all in one.”

Flying started as a hobby for the family, but soon became an integral part of a Centennial business on track for $400 million this year.