Yoga will continue to be practiced in the former Kindness Yoga space in Cap Hill.

Jordan Smiley, a former instructor with the Denver-based chain that last month said it was shuttering, told BusinessDen he has leased Kindness’ former space at 1280 Sherman St., Suite 214.

He plans to open his own studio, Courageous Yoga, in the approximately 1,500-square-foot space, which is above vegetarian restaurant City O’City in the Cap Hill neighborhood.

“Kindness dipped out on their lease, and I have a relationship with the folks that are here,” Smiley said. “In addition to that, founder Patrick Harrington announced publicly that all of their studios were ready to be rented and ready for use, and this has been my home base for a while, so it made a lot of sense.” 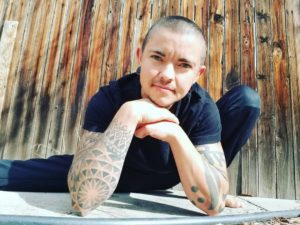 Smiley, who is Indigenous and transgender, plans to open with a core group of six instructors, some of whom are also minorities and LGBTQ.

“I’m working with some voices that have not been center stage, and I really believe that the change we need is going to come from instructors on the periphery,” he said. “Their experiences will contribute to a different way of yoga practice.”

Kindness Yoga founder and CEO Patrick Harrington told BusinessDen last month that he had been planning to close four of the chain’s nine locations as a result of the pandemic; the Cap Hill location would have been one of the five staying open. In mid-June, however, some instructors criticized the company publicly over treatment of non-white and LGBTQ instructors.

Harrington said this resulted in a wave of membership cancellations, which prompted his decision to close all the company’s locations permanently.

Courageous Yoga began with donation-based yoga classes that Smiley held on Zoom when the pandemic hit and Kindness studios were temporarily shuttered.

Once it became apparent Kindness was not going to reopen, Smiley started a GoFundMe campaign.

“I feel really aware of how this is a project that needs to reflect the needs and wants of the community,” Smiley said. “They are building this studio out of their own resources, and it’s a reflection of their desire for change.”

Smiley said Courageous Yoga staff will be trained to ask for consent if they want to touch someone, as well as their members’ preferred pronouns.

“It’s important to consider that there are people who have experienced trauma and are using yoga as a way to work on their healing,” Smiley said. “Touch is powerful; it’s not always healing.”

While yoga studios are able to open only at 50-percent capacity due to coronavirus regulations, Smiley said the community’s response has been more than enough confirmation to move forward with the business.

“This is a community that wants to be connected, and I believe it will sustain itself,” Smiley said. “I’ve witnessed that from the work I’ve been doing at home, and our business plan and projections show that we’re going to be just fine.”

It will be interesting to see how these instructors “on the periphery…will contribute to a different way of yoga practice”. A practice which has been going on for about 4,000 years.