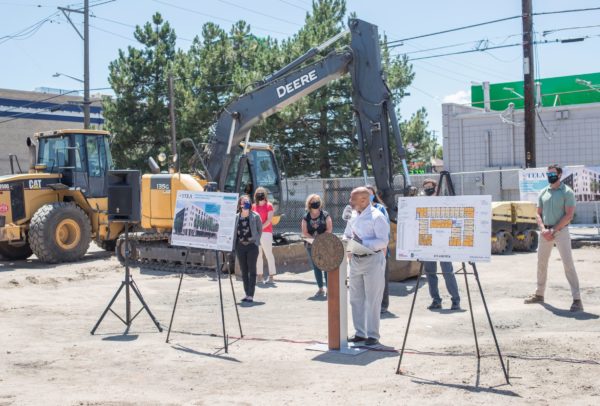 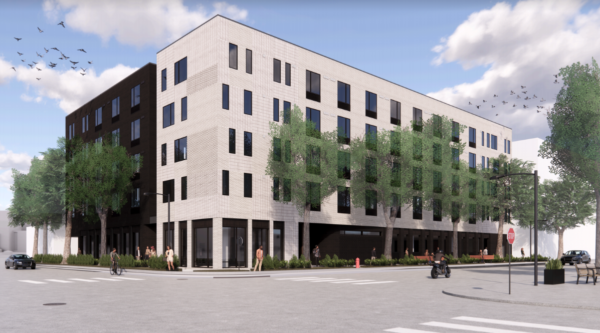 A five-story condo building in Lincoln Park that will be restricted to those earning up to 80 percent of the area median income has broken ground.

A groundbreaking ceremony was held last week for La Tela, which is going up at 603 N. Inca St., a corner lot along 6th Avenue. The project is being developed by the Elevation Community Land Trust and Shanahan Development; the Urban Land Conservancy is also involved.

La Tela will feature 64 studios, 24 two-bedroom units, and four three-bedroom units, ranging in size from 352 to 1,050 square feet. It also will have some ground-floor commercial space.

The La Tela project utilizes a land trust model, in which homeowners purchase the improvements and ECLT will maintain ownership of the land, leasing it back to owners under a 99-year renewable land lease. The units will remain income-restricted as they are bought and sold.

Denver’s Department of Housing Stability provided a $3.68 million loan from the city’s Affordable Housing Fund. The project also received other public finance funds from the Colorado Department of Local Affairs, as well as a private philanthropic subsidy from ECLT.

The project is expected to be completed by May 2021.

“It has been a personal passion of mine to bring affordable homeownership to educators and other essential working households in Denver; we are grateful for the partnership with Elevation CLT, the Urban Land Conservancy, and so many other public and private entities that have made La Tela a reality,” Jeff Shanahan, of Shanahan Development, said in a statement.

The 0.41-acre lot was previously home to an auto body shop. The Urban Land Conservancy purchased it in December 2018 for $1.8 million, according to public records.

La Tela is going up along 6th Avenue.