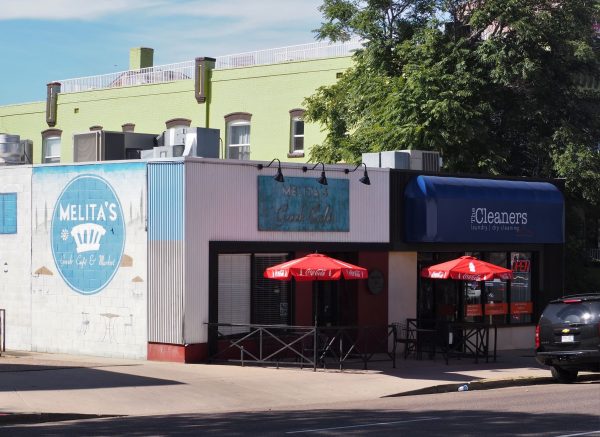 Christou purchased the retail building at 1035-1037 Lincoln St. this month, paying $1.95 million, according to public records.

The single-story structure is home to two tenants, a dry cleaners and Melita’s Greek Cafe & Market. The seller had owned the building for decades, records show.

The deal means all but one of the structures on the block between Lincoln Street and Broadway, and between 10th and 11th avenues, are owned by one of two companies.

Denver-based Gart Cos. owns the bulk of the southern and western end of the block, including the Sports Castle building along Broadway. The company is exploring redeveloping the site to essentially wrap the Sports Castle on two sides with a large apartment complex.

Christou, meanwhile, now owns the bulk of the northern and eastern end of the block, including the office building at 1045 Lincoln St. and 1082 N. Broadway, where his nightclub Club Vinyl operates. He already expanded his holdings on the block once this year, paying $3.1 million in January for the southwest corner of 11th and Lincoln.

The only building that Gart or Christou don’t own on the block is 1088-1092 N. Broadway, where’s Floyd’s 99 Barbershop operates.

Christou did not respond to a request for comment on the purchase. Besides Club Vinyl, he also owns and operates nightlife venues The Church Nightclub, Bar Standard and Milk Bar, all located within a block or so of the building he bought last week.

Correction: A previous version of this story misidentified the block on one reference.

Regas Christou already owns a number of nearby parking lots and buildings.