Mill Creek Residential, known for its Modera-branded apartment complexes, has developed in most of Denver’s hot neighborhoods.

The next stop? Cherry Creek, which the multifamily developer thinks will require breaking its typical mold.

“We think this is sort of a different audience,” said Chris Schramm, the firm’s vice president of development for Colorado.

The Dallas-based multifamily developer paid $10.5 million last week for 0.75 acres at the southeast corner of Madison Street and 2nd Avenue, according to county records. While planning is still in the early stages, the company hopes to develop a five-story complex, the max currently allowed by zoning, with approximately 100 units. 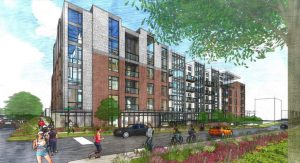 A rendering included in an early-stage development proposal submitted to the city by Mill Creek and Shears Adkins Rockmore earlier this year. (Public Records)

“We think it’s a phenomenal location,” Schramm said. “Great proximity to Cherry Creek North, but a little more of a quiet residential character to it.”

Schramm said the complex likely would be a bit more upscale than the company’s other Denver complexes, although Mill Creek isn’t planning to rival the “ultra luxury” offered by some new additions, such as BMC Investments’ St. Paul Collection.

Instead, the complex is likely to have upgraded kitchen finishes, with gas ranges instead of Mill Creek’s usual electric. Closet organization systems and Nest thermostats could be on tap. There likely would be more two- and three-bedroom units than the company typically builds, and a parking ratio of 1.4 spaces for every unit.

“They’ll be a little more mature renters, more likely to have cars,” Schramm said of the expected tenants.

The site, whose address is 180 Madison St., is undeveloped. The southern portion of the lot once had a two-story, 3,900-square-foot office building on it, but that recently was demolished.

The site was sold by Denver-based Western Development, which purchased it in October 2017 for $9.2 million, records show. It’s the second major sale by Western in Cherry Creek in three months; the firm sold the parking lot at 235 Fillmore St. to BMC Investments in June for $12 million.

Mill Creek Residential most recently wrapped up work on Modera Cap Hill at 1200 Grant St. and Modera River North at 2840 Blake St. The firm is building Modera West Wash Park at Speer and Grant, and Modera LoHi along 16th Street in that neighborhood.

Mill Creek also occasionally forgoes the Modera name, as in the case of Post River North and The Casey locally.

Schramm said the firm hopes to break ground on its Cherry Creek project within a year. Shears Adkins Rockmore drew up an initial development proposal for the site, but the company is shifting to OZ Architecture as things progress, he said.

Dallas-based Mill Creek has hit most of Denver’s hot neighborhoods. But Cherry Creek will require a different touch, a local executive said.