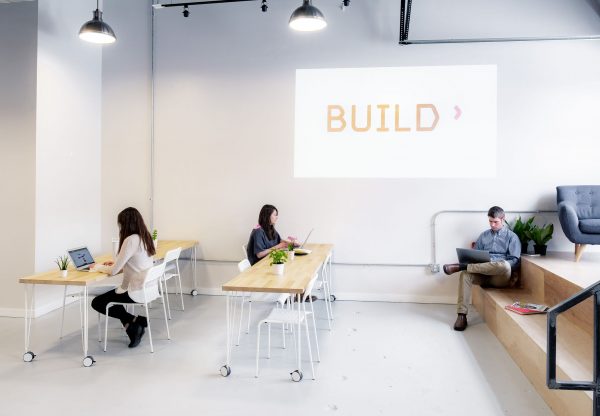 Radian has opened up its new coworking space in Five Points to other nonprofits and community organizations. (Photos courtesy Radian)

Last summer, Denver-based Radian found itself in a position similar to many of the people it tries to help.

The nonprofit, which specializes in urban design and architecture, got priced out of the coworking space it used at the Laundry on Lawrence in RiNo.

“A lot of what we work on is mitigating displacement, whether that be commercially or residentially,” said Camryn Walton, Radian spokeswoman.

Radian knew it wasn’t alone in getting priced out of the neighborhood; many of its fellow nonprofits found it difficult to find space as well. That was the impetus for Build, the coworking space Radian opened last month in 3,800 square feet at 3264 Larimer St. 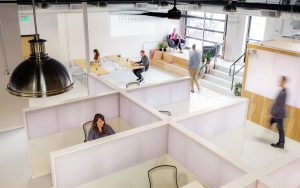 Radian is selling its coworking memberships to nonprofits and organizations, and funded the opening of Build with loans and grants, Walton said.

“We found a landlord that was really eager to work with us on this type of project,” she said. “There’s great food and restaurants and breweries, and it’s just a fun place to work.”

Radian also wanted to be in the neighborhood in order to be close to the people that are experiencing the area’s growing pains.

“We are locked into a good price here,” Walton said. “We started construction in August of last year and opened in January.”

Radian’s architecture team designed the space and Kent Construction built it out.

Build includes six private offices that can accommodate three to five people each, eight dedicated stations designed for one or two people and 20 floating hot desks. Memberships range from $150 to $950 per month. 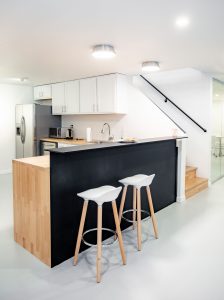 So far, Radian has rented out all of its private offices. Half of its dedicated desks and some of its hot desks are still available, Walton said. Tenants include design firm Borough & Block, Denver Architecture Foundation and B Lab, a nonprofit that manages nationwide B corporations.

Some of Radian’s past projects include the Beloved Community Village, RiNo’s tiny house project for formerly homeless people. It’s also involved with a 92-unit, five-story condo project planned along 6th Avenue in Lincoln Park, where the vast majority of units will be income-restricted, Walton said.

Also in the works is getting churches in the Denver metro area on board for the “Congregational Land Campaign” with which Radian is involved, which aims to help faith communities put affordable housing up on their underutilized land.

The Build space joins a crowded coworking market in Denver. The city now exceeds 1.1 million square feet devoted to coworking, according to a Savills Studley report from the fourth quarter of 2018.

Coworking giant WeWork dominates the Denver market, leasing an additional 600,000 square feet in 2018 to become the city’s No. 1 private office user. Specialized coworking brands coming to the city including women-centric firms Rise Collaborative and the Riveter.

Radian has opened up its new coworking space in Five Points to other nonprofits and community organizations. (Photos courtesy Radian)

Radian spokeswoman: “We found a landlord that was really eager to work with us on this type of project.”