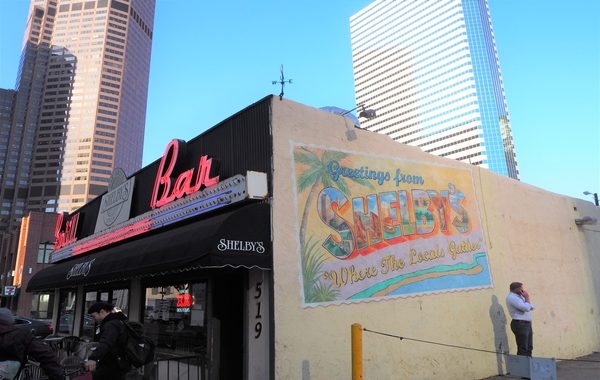 Shelby’s Bar and Grill has at least four more months until last call gets literal, according to its owner.

Howard Nelson, owner of the establishment at 519 18th St. — the lone structure in the path of a planned condo project — told BusinessDen last November that his new landlord said the business could stay at least through the Super Bowl, which took place Feb. 3.

Contacted again last week, Nelson said he’s since been told he can stay at least until June 30, but said he wouldn’t be surprised if the date were to be pushed again.

“It’s been pushed back three time already,” Nelson said. “It’s good for us, but it’s getting old. I need to know how much food to order.”

The Shelby’s building is owned by Amacon, a Vancouver-based residential developer, which purchased it and the large surrounding parking lot, 0.69 acres in all, for $8.8 million last March from an entity affiliated with the Anschutz family.

Amacon has proposed demolishing the bar to make way for two condominium towers. The towers, one 38 stories and the other 32, would combine for 463 units, and share an eight-story podium consisting of 530 parking spaces and about 12,000 square feet of retail space.

The project will be Amacon’s first ground-up development in the United States. The company did not respond to a request for comment Tuesday.

The building that now houses Shelby’s was a mortuary before it became a bar called Pink Lady Lounge. It was converted to Shelby’s Bar and Grill in 1979, and in 1991, Nelson and his wife Nanette paid $125,000 for the neighborhood pub (but not its real estate). The Nelsons and their now-grown children have run Shelby’s ever since.

In 2016, the bar landed on Esquire’s list of “18 Best Bars in America,” which called the neighborhood pub a reminder that Denver used to be an “ornery frontier town, full of crust and character.”