A Kickstarter for a baby sleeping bag has launched in Denver. (Photos courtesy Tavis Malcolm)

Englewood father Tavis Malcolm has been holed up in his garage with a 1970s Singer sewing machine for a few months.

The reason: He wants to take his baby son camping.

Dissatisfied with the options for infant outdoor sleep gear, Malcolm, 33, launched a line of sleeping bags for infants and toddlers Feb. 6 on Kickstarter, with a goal of $10,000 in sales.

“It’s just one of those things that was born out of necessity,” said Malcolm, 33, adding that he and his wife were looking forward to going camping with their newborn son, but couldn’t figure out a good option for sleepwear.

“The more we looked around and shopped online, the more we realized there wasn’t anything,” Malcolm said.

For parents with newborns looking to camp outdoors, Malcolm said one option is to put the baby in the parents’ sleeping bag, which he said can endanger the baby through overheating or suffocation. The other option is to layer the baby up in layers of pajamas, snow suits and blankets.

“You can imagine sleeping in eight layers of clothes,” he said. “It doesn’t regulate. If you need to change them, that’s a huge pain to dig through all these layers.”

So Malcolm wanted to create an insulated down contraption that could keep children up to age 2 warm. He founded Morrison Outdoors, naming the company after his son Morrison.

After fulfilling Kickstarter orders, Malcolm expects to sell the bags for between $79 and $170.

“We’ve tried it on babies of all different ages so that we know that they fit,” he said.

The sleeping bags come in down and synthetic options, and can keep babies warm in weather up to 20 degrees. They also zip from the bottom up for easier diaper changes. 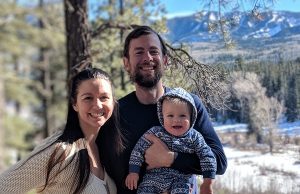 “I’ve been sewing these things in our garage, but obviously that isn’t very scalable,” Malcolm said. “Our goal is to raise enough money to fulfill all the orders, and then still have some to sell during the summer.”

Malcolm moved to the Denver area from Tacoma, Washington, in June 2016. He has a background in digital marketing; his wife is a pediatric nurse. Malcolm sees his product as part of a larger trend of young parents wanting to stay active and adventurous with their young children.

“There are more people out camping and hiking,” Malcolm said. “More of us have kids and we love to be outdoors. We talk to the older generation and they think we’re crazy.” 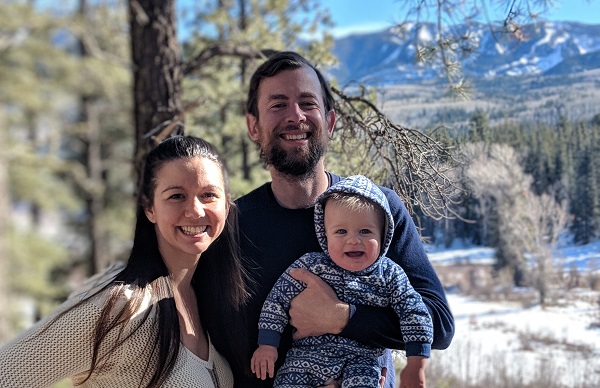 A Kickstarter for a baby sleeping bag has launched in Denver. (Photos courtesy Tavis Malcolm)

“We’ve tried it on babies of all different ages so that we know that they fit,” Tavis Malcolm said.