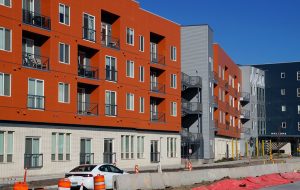 The founder of a Centennial-based company that offers classes on real estate investing has been sued by a former student who says he was ripped off when he began doing business with one of the company’s coaches.

Anthony Chara was hit with a lawsuit filed June 6 in Arapahoe County District Court by Rocco Sirizzotti, a Texas resident.

Chara, who lives in Colorado, is the founder of Centennial-based Success Classes LLC and a related entity, Apartment Mentors LLC, which offer classes around the country. Chara did not respond to a request for comment.

Sirizzotti said in the lawsuit that he enrolled in Chara’s Success Classes program in the summer of 2014, which involved “live coaching assistance and mentoring, webinars, and expert interviews.” Sirizzotti paid at least $10,000, and in December 2015, Chara picked a Colorado man named David Sanchez to be Sirizzotti’s “Gold Coach.”

According to the lawsuit, Chara presented Sanchez as an expert in the rehabilitation of multifamily apartment complexes.

Sirizzotti alleges that Sanchez instead “acted with hostility as well as gross incompetence.”

“In most cases, after being granted equity upon acquisition of the properties, Sanchez soon abandoned his duties entirely, failing to perform his role as the Rehab and Maintenance Management Partner for the project, and forcing Plaintiff and his partners to step in and complete all of the work,” the lawsuit claims.

The lawsuit also alleges that Sanchez “fraudulently distributed return of capital funds and excess renovation funds to himself and Anthony Chara, although they invested in the project.”

Chara was also a partner in one of the deals. He was granted 5 percent equity in one complex in exchange for serving as “experience manager,” according to the lawsuit, which states that his presence “did little to mitigate Sanchez’s animosity.”

Sirizzotti says in the lawsuit that he “repeatedly attempted to resolve his grievances with Sanchez amicably,” even offering “to repurchase Sanchez’s unearned equity,” but that Sanchez “has refused all attempts to compromise.”

The lawsuit accuses Chara of negligent misrepresentation causing financial loss, and his LLCs of violating the Colorado Consumer Protection Act. The lawsuit accuses Sanchez of fraudulent inducement, breach of contract and unjust enrichment.

The plaintiff is represented by Michael Davis and Cassandra Wich of Denver-based DLG Law Group.

The former student says he got ripped off when he began doing business with a Success Classes “Gold Coach.”