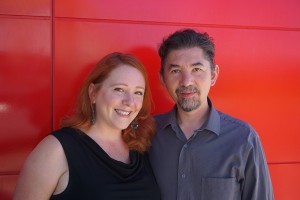 “Everyone who has ever started a business has the same story about construction,” Erica said. While the couple loved their location when they picked up its lease in 2016, they quickly realized the building’s floors weren’t strong enough to support hulking pieces of brewing equipment.

The brewery opened in Littleton last week after five years of planning and nearly a year of construction delays.

The 4,400-square-foot location at 9719 W. Coal Mine Ave. features an outdoor patio, a fenced dog-friendly yard, and four craft beers on tap with as many as eight more on the way.

The Bacas formerly worked in the corporate finance world, with Erica working in customer service and Manuel as a project manager. Since 2008, they brewed their own beer as a hobby — “Baca-toberfest” was a fall staple with their friends and family.

When Erica was laid off in 2014 — roughly a year or so into Colorado’s craft beer boom — half-serious conversations about opening a brewery turned into business plans and sketches.

In the interim, the Bacas were surprised at the support they found from the Colorado craft brewing industry.  “Everyone knows what we’re going through,” Erica said. “They’re proactive and calling us, asking what they can do.”

Coming up with a canine-minded establishment was a chief priority while the Bacas developed their brewery.

They were going to name the brewery Off Leash Ales, but decided not to because of potential trademark trouble, Erica said they saw a market for couples working downtown and living in the Denver suburbs with four-legged friends.

With dogs waiting at home, Erica said she and Manuel often were torn between the city’s breweries and the time it would take to trek back and forth. With a brewery open to dogs, the Bacas figured, they’d be able to tap into a community that otherwise would have a difficult time enjoying an after-work brew.

Although the Bacas signed a lease for 6,700 sf in 2016, they ended up fitting their brewery and taproom into 4,400 sf. They’re negotiating with an Asian fusion restaurant about taking the rest of the space.